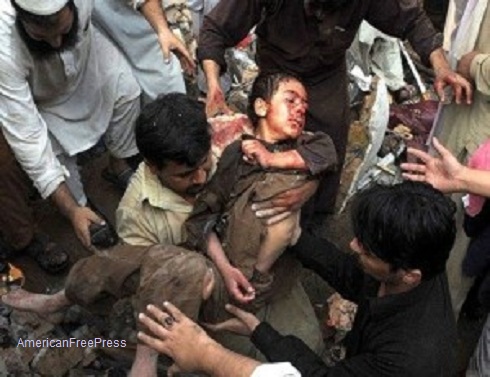 Detailed information from the families of those killed in drone strikes in Pakistan and from local sources on strikes that have targeted mourners and rescue workers provides credible new evidence that the majority of the deaths in the drone war in Pakistan have been civilian noncombatants – not “militants,” as the Obama administration has claimed.

The new evidence also shows that the statistical tally of casualties from drone attacks in Pakistan published on the web site of the New America Foundation (NAF) has been systematically understating the deaths of large numbers of civilians by using a methodology that methodically counts them as “militants.”

The sharply revised picture of drone casualties conveyed by the two new primary sources is further bolstered by the recent revelation that the Obama administration adopted a new practice in 2009 of automatically considering any military-age male killed in a drone strike as a “militant” unless intelligence proves otherwise.

The data on 11 drone strikes from 2008 through 2011 were collected in 2010 and 2011 from families of victims of the strikes by Pakistani lawyer Mirza Shahzad Akbar. Those 11 cases represent only a fraction of the total number on which Akbar has obtained data from victim’s relatives.

Although relatives of drone strike victims could have a personal interest in declaring the innocence of their relatives, the details provided by relatives in legal affidavits, such as the age, employment and other characteristics of the victims, appear in almost every case to support their claims that those killed were not actively involved with al-Qaeda or other military organizations.

The data on 13 drone strikes targeting rescuers and mourners from 2009 through 2011 were gathered by the London-based Bureau of Investigative Journalism (BIJ) in a three-month investigation in late 2010 and early 2011 involving interviews with eyewitnesses and others with direct knowledge of the strikes.

The NAF Database: Origins of the Discrepancies

But Bergen’s estimates are not focused on estimating civilian casualties. Instead, they track the deaths of an undefined category of victims called “militants” by individual drone strike and by year. Those totals are shown in graphs with the residual category of “other” reflecting the overall total minus the total of “militant” deaths.

Bergen deals with high-end estimates that are 54 and 52 percent above the low end estimate by averaging them out. But the real issue is whether a very large proportion of the dead referred to by those anonymous sources giving the totals to reporters in Pakistan as “militants” were, in fact, noncombatant civilians.

The data compiled by Akbar and the BIJ strongly suggest that conclusion.

The NAF tally on the 11 strikes on which Akbar collected data from the victims’ families shows a total of 66 to 78 “militants” killed along with 39 to 47 “others” – the term NAF uses in place of “civilians.” But the information from the victims’ families indicates that the number of “militants” killed was actually 27 to 34, while the number of civilians killed was 86 (See addendum below).

Instead of representing only 30 percent of the total casualties in those 11 strikes, as portrayed in the NAF accounting, civilian casualties actually accounted for nearly three-quarters of the total, according to the relatives’ testimony.

The data on 13 drone strikes targeting funerals and rescue efforts reported by the BIJin February similarly contradict the NAF tally of deaths. The NAF recorded a total of 90 to 176 dead in 12 strikes which the BIJ was able to confirm as targeting rescuers or mourners; 77 to 153 of the dead were listed as “militants,” whereas only 13 to 24 were listed as “civilians.” But eyewitnesses and other sources considered reliable in the localities reported that between 80 and 107 civilians had been killed in these attacks on rescuers or mourners. That suggests that the higher estimates for “militants” usually included the civilians killed in those strikes.

So, when adjusted for the new data, the estimate of “militants” killed would be 77 to 112, and the figure for civilians would be 80 to 107. The revised total of civilian deaths in those strikes is essentially equal to the revised total for “militants.”

Combining the data on the two sets of drone strikes, the original estimate for “militant” deaths in the NAF accounting was a range of 143 to 231, but the figure based on actual local testimony is 104 to 146 – a 60 percent decrease. The figures for civilian deaths, on the other hand, increases by 66 percent, from the range of 52 to 71, based on the NAF tally, to an adjusted range of 164 to 193.

Thus civilian casualties, which were less than a third of the “militant” casualties in the NAF accounting for the 24 drone strikes in question, are revealed to be 70 percent of the total.

The data from relatives of drone strike victims is not limited to the 11 cases cited in this article. Details on casualties may become available in the future on 39 more drone strikes.

When Akbar made the data on the first 11 cases available to Truthout in August of 2011, he offered to make the data on 15 more cases available when the process was complete. Akbar said that 25 relatives of victims had already been interviewed and signed affidavits, and that another 25 interviews were already in process. He said he believed an even larger set of interviews with victims’ families would eventually be possible.

Akbar decided later to turn over all the data he had collected from victims’ families to two academic institutions – New York University’s Global Justice Clinic and Stanford University’s Human Rights and Conflict Resolution Clinic. Neither of those institutions was willing to share the data they have obtained from Akbar with Truthout prior to publishing their own analyses of drone-strike casualties.

The Obama administration has sought to discredit Akbar, a UK-trained lawyer who has been practicing before the bar in Pakistan since 2003, ever since a Pakistani whose uncle and son had been killed in a drone strike publicly named the CIA’s station chief in Islamabad, Jonathan Banks, at a press conference with Akbar in December 2010. Banks was forced to quickly leave the country. Akbar and the Foundation for Fundamental Rights, which he runs in Islamabad, initiated a lawsuit seeking $500 million in damages from Banks, then-CIA Director Leon Panetta and then-Defense Secretary Robert M. Gates on behalf the families of victims of drone strikes.

In August 2011, administration officials attacked Akbar in interviews with Scott Shane of The New York Times as seeking to discredit the drone campaign on behalf of Pakistan’s intelligence agency, ISI. Shane wrote, however, that colleagues of Akbar in Pakistan “strongly deny” the accusation, quoting one lawyer who had worked with Akbar as saying the charge was “not credible at all.”

The systematic underestimate of civilian casualties by the NAF statistical summaries is in part a result of Bergen’s methodology for estimating the number of “militant” deaths and “other” deaths – a methodology which assumes that news media reports can always be relied on to estimate the number of “militants” killed in each strike, and which also reflects an underlying political bias in favor of the drone-strike program. The consequence is the distortion of the real toll of drone strikes on civilians in the first four years of the program from 2004 through 2007.

During that period, the CIA carried out only 12 strikes, but one of them targeted a madrassa on October 30, 2006, killing as many 83. One of the press articles to which the NAF database links on that strike is a BBC story quoting the Pakistani Army spokesman as saying that the madrassa was destroyed by Pakistani air strike because of “confirmed intelligence reports” that militants were hiding in the school and that it was being used as a “terrorist training facility.”

But the same article quoted an eyewitness as saying that the dead were local students, not terrorists. Subsequently, a Pakistani newspaper, The News, published a complete list of the names and ages of the students showing that 26 of the 83 were children under the age of 15, but the NAF database account of the strike does not link to the story, even though it links to an earlier story by the same newspaper reporting the official line that “militants” were killed in the strike.

Despite the clear evidence that the victims were students, the NAF continues to list those 83 victims as “militants killed” in its statistical summary of the incident, while also estimating “others killed” as 12 to 83. Those figures were both illogical – since uncertainty would have demanded that both categories be scored 0-83, and failed to reflect the Musharraf administration’s admission to The Sunday Times a month later that the Pakistani military had lied about the strike at the time to cover for the CIA, thinking it would be “less damaging if we said we did it rather than the US” and that the “collateral damage” was such that they had requested that the Americans “not do it again.”

Six years later, the NAF “Year of the Drone” web page is still telling readers that 92 “militants” were killed during the first four years of the drone war and that the number of “others” – meaning civilians – killed was just nine. Bergen’s accounting thus ignores the highly credible evidence of a mass slaughter of innocents and gives the CIA high marks for its discrimination.