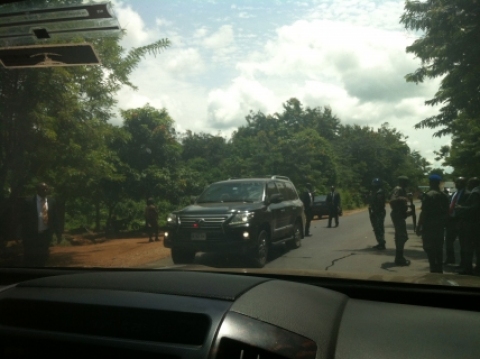 Security operatives have arrested prominent members of the All Progressives Congress (APC) in the 16 local government areas of Ekiti State ahead of tomorrow’s governorship election.

In something like a commando raid in a movie, joint teams of security operatives comprising the army, mobile police and State Security Services (SSS) this evening embarked on the indiscriminate arrests and generally terrorizing people.

Among those arrested, in Iye Ekiti, the headquarters of Ilejemeje Local Government, Mr. Olaiya Popoolati was picked up by the security men and whisked away to an unknown destination. Another leader, Chief Kehinde Babatola who was also earmarked for arrest, had his wife picked up when he could not be found at home.

Also in Ado Ekiti, the state capital, 10 men who were watching the France and Switzerland World Cup encounter at Hilmat Hotel were arrested on the suspicion that they were APC members.  An eye witness who saw them being taken away said the men were virtually dragged into a waiting truck.

Reacting, an APC leader in Iye Ekiti, Chief Folorunsho Olabode, described the arrests as an attempt to intimidate the people of Ekiti so that they do not exercise their civic rights tomorrow.

“We will not allow our State to be turned to a war zone,” he said. Persons being picked up indiscriminately without any offence are an attack on the generality of Ekiti people. And why would it be that these arrests are targeted at only APC members?”

In a related development, people of Ijeshamodu in Moba Local Government tonight alleged intimidation and harassment by some members of the Peoples Democratic Party led by a former member of the House of Representatives, Duro Faheyi.