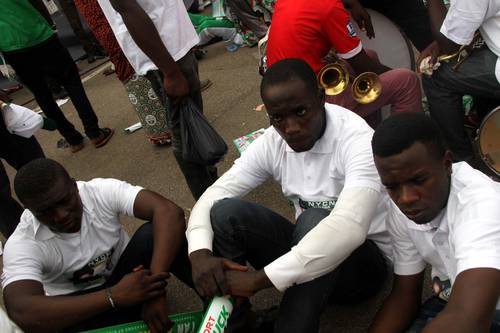 Thousands of rented supporters of President Goodluck Jonathan today staged an embarrassing sit-down protest throughout his official declaration at Eagle Square in Abuja to show their anger over non-payment of their N2000 per head fee.

The hired supporters, who converged at the venue of the event as early as 7.00am, maintained that their handlers had failed to pay the money promised to them.

A visibly-angry supporter who pleaded anonymity expressed his displeasure over the nonchalant attitude of some of the leaders of the various groups who brought them to the event for not showing any concern for their welfare despite the long distances they had to travel.

“They asked us to enter the bus when they came to Maraba this morning and they promised to give us two thousand Naira each and also give us food but we are very disappointed to see them running around and later disappear into the middle of the crowd and nobody come back to give any money or bring water for us to drink.”

Effort to get any of the leaders to react to the allegations was fruitless as their mobile phone numbers were switched off.