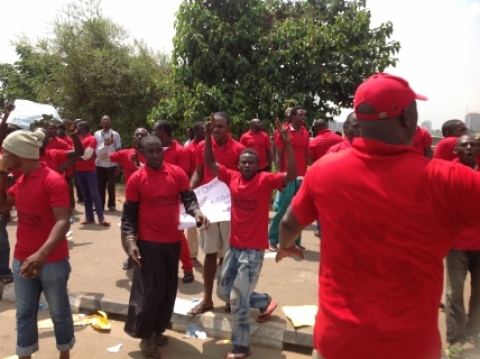 A group of anti-corruption protesters was today in Abuja confronted by armed hoodlums escorted by the police to frustrate a public protest aimed at forcing the Minister of Aviation, Stella Oduah, to resign from office.

The Minister is facing a public uproar over her scandalous purchase of BMW armored cars from a cash-strapped agency in her ministry.

Dino Melaye, a former member of the House of Representatives, led the protest, but the protesters were attacked by the crowd who claimed they were there to ‘support’ the Minister.

The police arrested several protesters, including Mr. Melaye, saying he was leading an “illegal protest”.  He was taken in a car to the office of the Commissioner of Police office where he was taken into custody.

The police also seized vehicles belonging to the anti-corruption protesters, claiming they were obstructing traffic.

A contingent of police officers also prevented the protesters from leaving the Federal Secretariat area where they had gathered for the protest to the Aviation ministry.

Unlike the protesters, the police did not harass the armed hoodlums.