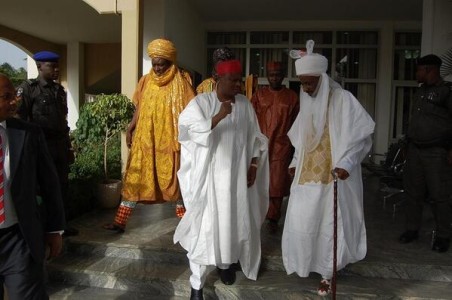 The Nigerian government has banned private planes from landing at the Mallam Aminu Kano International Airport in Kano.

Chris Olukolade, the spokesperson for the Nigerian military, told PREMIUM TIMES that the ban was for “security reasons.”

Mr. Olukolade, a Major-General, declined to state the nature of the security concerns.

But a source in the military told PREMIUM TIMES that the directive would not be unconnected with Sunday’s crowning of Lamido Sanusi as the new Emir of Kano.

“After the Emir was appointed, there were lots of protests from the group supporting the late Emir’s son. The security agencies must have felt that certain actions need to be taken,” the source, who declined to be named because he was not authorized to speak for the military, said.

Yakubu Dati, the spokesperson for the Nigerian aviation parastatals, said the military usually takes such decisions when there are security concerns.

“We as an authority, we have not banned any plane from landing in Kano. You know there is civil aviation and there is also military aviation which supersedes ours,” Mr. Dati said.

“They don’t consult anybody. They just go ahead with their decision since it is about security,” he added.

The news of the ban came after Umaru Al-Makura, the Nasarawa State Governor, who was flying into the Kano airport from Makurdi on Monday morning, was denied clearance to land by the airport commander, PREMIUM TIMES learnt.

On Sunday, several party chiefs from both the Peoples’ Democratic Party, PDP, and the All Progressives Congress, APC, flew into Kano prior to the appointment of the new Emir.

Nasir El-Rufai, an APC chieftain, described the military’s action as a “hopeless persecution” of Mr. Sanusi by the Nigerian government.

“Is Nigeria under military rule or martial law allowing the violation of constitutional rights with such impunity,” Mr. El-Rufai said on his official Facebook page.

Before his emergence as Emir, Mr. Sanusi had been having a running battle with the Goodluck Jonathan administration, with the president controversially suspending him as Governor of Central Bank.

His passport was also seized by security agencies and he was prevented from travelling out of the country.

While the government claimed it was acting based on allegations of graft against the ex-CBN chief, many Nigerians believe he was being persecuted for exposing the corruption in the Nigeria National Petroleum Corporation, NNPC.

To evade arrest, Mr. Sanusi spent the night at the Kano Government House.

The new Emir of Kano Lamido Sanusi on Sunday narrowly escaped being arrested by security operatives at his personal residence in Kano hours after he was appointed to the coveted throne.

A source who declined to be named for security reasons said the Kano state Government hurriedly sneaked Mr. Sanusi out of his personal residence after receiving intelligence that the Federal Government was plotting to arrest him to stop him from being turbaned.

“It is true his royal highness did not sleep in his house after information came that there are moves to arrest him for reasons we don’t know,” the source said. “The governor had to arrange for him to be smuggled into the Government House where he passed the night.”

It is not clear why the government wanted to arrest the emir. The spokesperson of the Kano state command of the police, Magaji Majiya, did not answer or return calls made to his mobile telephone.

The spokesperson of the SSS, Marilyn Ogar, could also not be reached for comments.

Mr. Sanusi has however been having a running battle with the administration after he was, on February 20, suspended from office as Governor of the Central Bank of Nigeria by President Goodluck Jonathan while he was away in Niamey, Niger Republic, on official assignment.

Upon his return to Nigeria, operatives of the State Security Service, briefly arrested and detained him, and also confiscated his passport.

Mr. Jonathan had stated that Mr. Sanusi was suspended over allegations of financial recklessness by the Financial Reporting Council of Nigeria, FRC, an accusation Mr. Sanusi denied.

On May 3, SSS operatives at the Mallam Aminu Kano International Airport again prevented him from travelling out of the country.