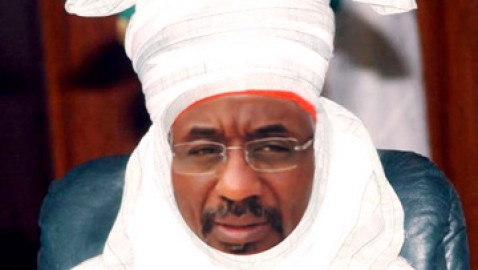 The 18-year old becomes the emir’s fourth wife. She recently completed secondary school and is been enrolled for advanced level studies.

In addition to his first wife, Sadiya, who is the daughter of the late emir of Kano, Ado Bayero, Mr. Sanusi has two other wives — Maryam and Rakiya.

The secret wedding was contracted in a low-keyed ceremony in the town of Yola on Friday.

Palace sources in Yola told PREMIUM TIMES the wedding fatiha held inside the palace of the Lamido minutes after Jumma’at prayer.

Insiders say that the influential emir only sent out invitation to some dignitaries across the country, as Kano government officials sneaked into Yola for the wedding fatiha to avoid journalists.

The Kano State Governor, Abdullahi Ganduje, was said to have acted as the guardian for the groom, while his Adamawa counterpart, Jibrilla Bindow, played the role of the bride’s guardian, who gave her hands out in marriage to the monarch.

Mr. Sanusi’s rumoured marriage to the princess was debunked in the past.

“His decision to take a new wife is in line with Islamic injunction.

Islam allows having a maximum of four wives for those who can treat all of them equally and provide for a large family,’’ said a top Kano state government official who travelled to Yola for the wedding.

A social commentator, Dan’Almajiri Ibrahim, argued that in ancient times, links between empires were tightened by marriages among royals and nobles across boundaries.

“So, the engagement of the Adamawa princess to Emir Sanusi II may also be a move to deepen royal bond between Adamawa and Kano.

“You see, historically, both emirates have similar origins in the 19th Century Uthman Bn Fodio’s jihad,’’ he concluded.

Emir Sanusi could not be reached for comments as he is currently away in Saudi Arabia, where he is acting as leader of Nigeria’s delegation to this year’s hajj.

A highly placed palace source however confirmed the development to PREMIUM TIMES, saying Sa’adatu would not move in with the emir immediately.