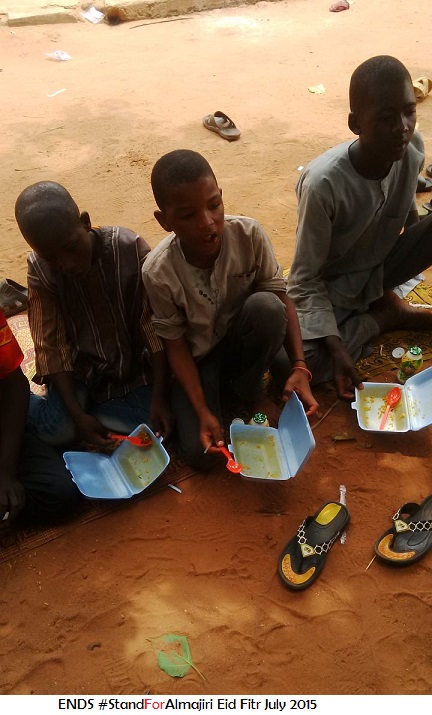 A ram was killed and cooked for the wanderer kids and food and drink served to them at three different ‘schools.’
Mohammed Sabo Keana, coordinating the project observed that otherwise the children had no festive celebration plans scheduled and had only sadly been engaged in their routine alms begging for Sallah as has been the unbelievable case over the years.

The Mualims (teachers) at the schools thanked ENDS for the humanity, stating that this was the first time the children were ever being recognized and hosted to a big Eid party.

The gesture was however not the first time ENDS would feed the Almajiri for Sallah. During the small Sallah, Eid al-Fitr in July this year, as part of the #StandForAlmajiri project, the ENDS coordinator, Mohammed Keana had similarly fed about 30 Almajiri students at a school in Nasarawa who were likewise thankful and commended the action as a first ever.

Over 10 million Nigerian children are out of formal education, typically sent off by their parents as Almajiri to beg for a living and to pay for thier Islamic education. This in violation of global regulations. Many permanently lose connection with their families and are brought up under the worst conditions of existence imaginable.

The #StandForAlmajiri “Almajiri project” has been setup to address and correct the Almajiri boys abandonment and condemned-to-destitution social crisis.

Indeed the Almajiri crisis is perhaps the most monumental social and humanitarian tragedy in current times and one with very dangerous and deadly consequences as Nigeria is well aware.

The #StandForAlmajiri project entails recognition and restoration for Almajiri-child victims, social awareness campaigns including documentaries (in production) and the consultation of families, traditional and political leaders towards formally protecting, repatriating current Almajirinci and bringing a gradual end to the operation of child labour schools. 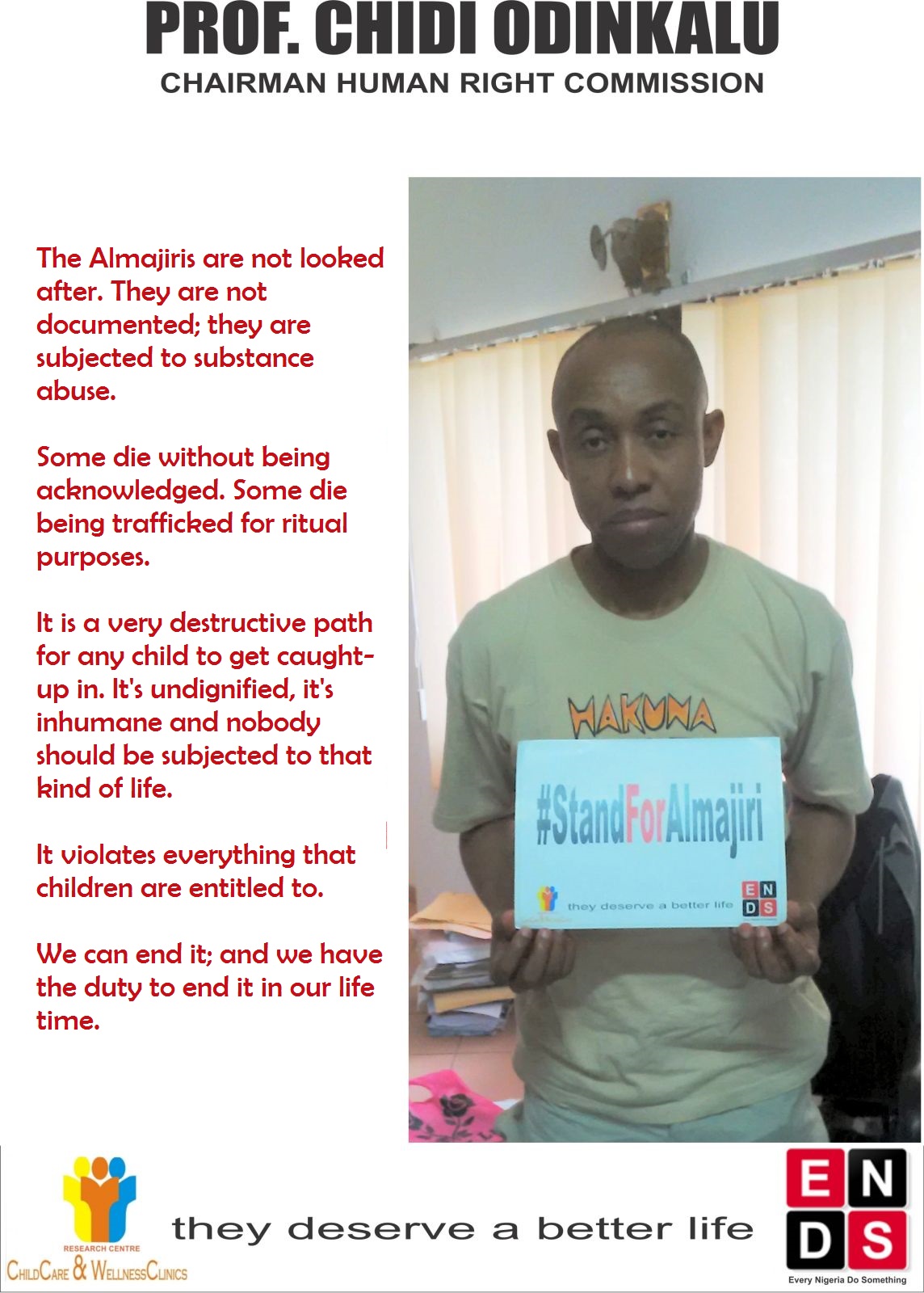 Speaking to ENDS about the Almajiri saga and Stand Up Almajiri project, Nigerian Human rights commission boss, Professor Chidi Odinkalu Said, “The Almajiris are not looked after. They are not documented; they are subjected to substance abuse. Some die without being acknowledged. Some die being trafficked for ritual purposes. It is a very destructive path for any child to get caught-up in. It’s undignified, it’s inhumane and nobody should be subjected to that kind of life. It violates everything that children are entitled to. We can end it; and we have the duty to end it in our life time,” in a recording that is part of the project documentary.

Several parents, leaders of thought and Islamic scholars have also contributed their recorded words to the project describing the urgent need to address the Almajiri child abandonment crisis.

We call on all Nigerians and friends of Nigeria and children of the world to #StandForAlmajiri today! They deserve a better life!