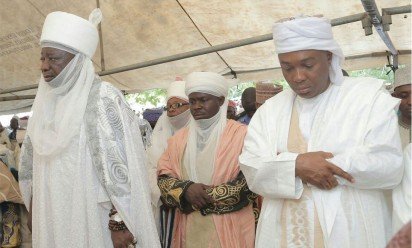 The Eid prayers in Ilorin Thursday were severely disrupted due to the stoning of senate president Bukola Saraki.

While the pre-prayers sermon was broadcast on the public address, PA system, for some reason when the hurried prayer was performed the PA system was turned off. We have been unable to find out whether the system was turned off to conduct the prayers quietly so Saraki could be rushed out before he gets hurt, or if it was the mobs who had gathered and were throwing stones on the Saraki VIP tent that pulled the cables to the PA system.

Because the PA system was turned off, many did not know the prayer was on and different faithfuls joined various stages of the prayer late or missed it all together.

Additionally faithfuls reported that the prayers were conducted different than ordained. Rather than repeat the opening “Takbir” praise, “Allahu Akbar” several times, it was said only once.

There had been active warnings that the people were upset and were going to stone. Stones had even been gather to be thrown since days before. The Kwara governor rather went to say his prayers in his hometown of Share.