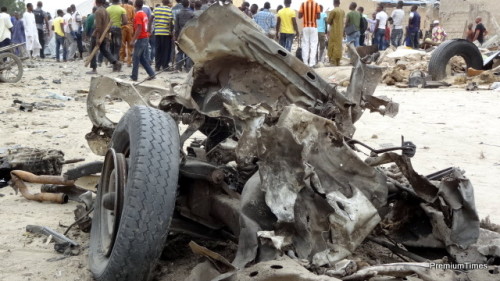 Gunmen suspected to be members of the extremist Boko Haram sect have invaded Maiduguri, the Borno state capital, throwing the city into pandemonium.

The attackers, shooting sporadically at anything in sight, arrived at about 7:20 a.m. Friday through an area called Fori, near the Army’s main base called Giwa Barracks.

The heavy shooting continues as at the time of this report.

An airforce jet fighter arrived exactly an hour after the attack started.

Women, children, men, young and old around the Giwa barracks area were seen running in confusion.

Echoes of gunfire and explosion were heard from the area.

The military jet continued to drop bombs at targeted areas.

Armed policemen have taken over some of the major roads leading to major government facilities.

Those who saw some of the attackers said they were dressed in military uniform.

The Boko Haram insurgents attempted invading the Giwa Barracks, but were repelled by soldiers.

The attack is still on.

UPDATE: PREMIUM TIMES reporter in Maiduguri narrowly escaped being shot by Boko Haram insurgents. He is currently after his neighbourhood came under sustained attack. He managed to escape with his family and is currently in hiding.