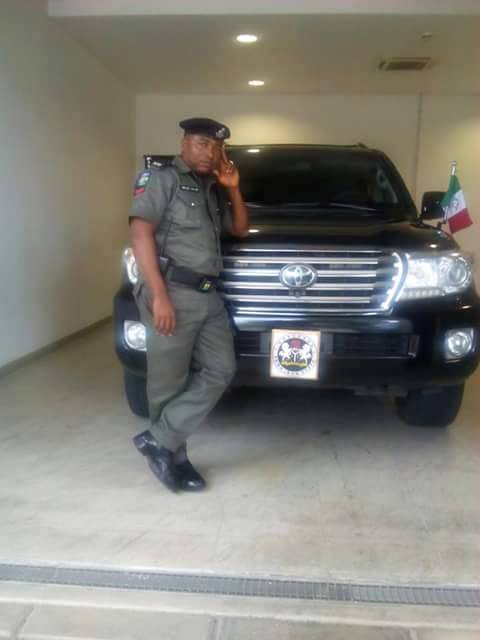 SaharaReporters has learned that the official driver for the Akwa Ibom State Governor, Udom Emmanuel, has been brazenly impersonating a Nigerian Police Force officer by wearing a full police uniform and with the knowledge of Governor Emmanuel. This highly criminal and fraudulent act has continued with impunity for a long time, according to sources.

Udom Emmanuel, who had served Zenith Bank Plc in different capacities at various times, including as Executive Director and General Manager, left the bank in 2013 and took an appointment as the Secretary to the Akwa Ibom State Government under former Governor Godswill Akpabio. While leaving the bank, he took a along with him some other staff of the bank who had worked closely with him, including his present official driver, Bassey Edet Bassey.

A source close to the Governor however told SaharaReporters that the governor had asked all those wishing to work with him to resign from the bank. However, we learnt that unlike his colleagues who had also left the bank to work with the Governor, Mr. Bassey refused to formally resign and continued to receive salary and other fringe benefits from Zenith Bank.

Further investigation by SaharaReporters revealed that all those who left the bank to work with the Governor had been officially recruited into the Akwa Ibom State civil service on the orders of the Governor. Based on this arrangement, the Governor’s driver, Mr. Bassey, was originally posted to the Office of the Secretary to the State Government as a clerical officer. However, he continued to serve the Governor as a driver contrary to his official work schedule.

As if that was not enough, SaharaReporters learnt from sources that Mr. Bassey, has been impersonating the Nigerian Police Force by wearing complete police uniform to work. One of the sources that spoke with SaharaReporters expressed dismay over the matter and wondered why the Governor should be indulging the criminality of his official driver.

“We have been wondering why someone who is not a police man should be dressing as one simply because he drives the Governor but no one has been able to raise an eyebrow on the issue for fear of being victimized by the Governor. He started by using the rank of a Corporal but later promoted himself to a Sergeant.”

“Some days he will put on the Mopol camouflage and even the blue beret which is only meant for officers in the Special Protection Unit, a squad that protects some VIPs. He has been doing this despite the fact that his name is on the Civilian Drivers List in the Government House. But because he is the Governor’s favorite nobody dares to question him,” according to a source within the Akwa Ibom State Government House in Uyo told SaharaReporters.