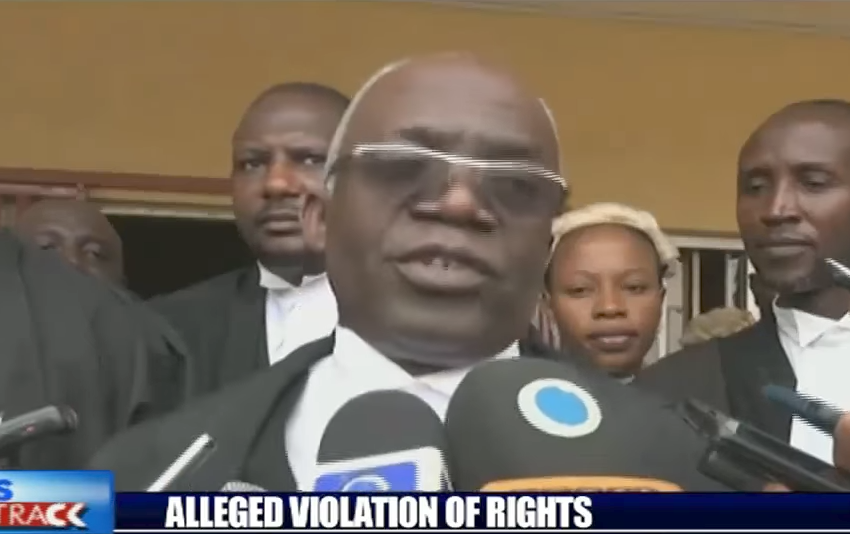 Femi Falana, lawyer to Sheikh Ibraheem Elzakzaky, leader of Islamic Movement in Nigeria (IMN), has revealed how the State Security Service (SSS) deceived the cleric’s followers with his appearance at a press conference on Saturday.

Speaking exclusively with SaharaReporters, Mr. Falana said the deceit was in response to social media rumour of Sheikh Elzakzaky’s death in detention, where he and his wife are illegally held by the SSS.

The lawyer recalled that he dismissed the rumour through the issuance of a public statement in which he requested the Federal Government to release the cleric and his wife, so they could go to seek urgent medical attention.

But rather than accede to the request, he said, the SSS lied to Sheikh Elzakzaky and his wife that the Federal Government was ready to release them after the press conference to assure his followers that he is alive and well.

“Hence, they agreed to the media parade, which lasted for one minute and 20 seconds on Saturday in an undisclosed detention custody in Abuja,” said Mr.Falana.

He disclosed that contrary to the claim that the cleric is hale and hearty, he, in fact, currently wears a neck brace bought for him after he was injured in a fall last month.

“That was when his personal doctor was allowed to examine him for the first time in his over two-year detention period. Before the neck injury, he had lost his left eye. The recommendation of eye specialists that he be flown abroad to save the right eye and prevent him from going totally blind has been ignored by the Federal Government. In fact, the medical state of his wife is by far worse than his. She has been subjected to excruciating pain as some of the bullets deposited in her body on December 14, 2015 during the military invasion of their home in Zaria have not been removed,” he said.

Mr. Falana said organisers of the press conference deliberately prevented her from addressing the media representatives even when she was present. He warned the Federal Government to immediately end its long-running contempt of the Federal High Court by complying with the order for their release from SSS custody.

VIDEO: Leader of Nigerian Shiâa sect, Ibrahim ElZakyZaky paraded in Abuja before a select group of journalists to quell rumors of his death pic.twitter.com/g0W3OjAAZW

“The order, which was made on 2 December 2016, has not been set aside by any higher court. Yet, the Federal Government, which claims to operate under the rule of law, has ignored the court order. However, if the Federal Government does not want to end the official impunity of treating a valid and subsisting court order with disdain, it should release the Elzakzakys to their children, who have applied to take them abroad for urgent medical treatment,” he requested.

The lawyer stated that the is request is in line with Nigerian Prison Regulation 12, which stipulates that even convicts shall be released to their relatives or friends if the prison has no facilities for treating them.

“In Fawehinmi v The State (1990) 1 NWLR (pt 127) 486, the appellant was granted bail and released on bail pending trial by a military junta. The situation should not be worse under a democratic dispensation.  In the instant case, the Elzakzakys have not been charged with any criminal offence whatsoever.  The spurious claim of the Federal Government that the detainees are held “in protective custody was dismissed by the Federal High Court,” he further stated. He added that the Federal Government should have directed the SSS to immediately release the cleric and his wife instead of taking them through a choreographed and illegal parade before the media.