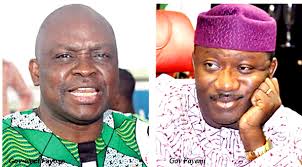 Governor-Elect of Ekiti State, Ayodele Fayose has described Governor of Ekiti State, Dr. Kayode Fayemi as a desperate and stumbling block on the way of the incoming administration.

But the Governor-Elect, while reacting to the appointment of the new permanent secretaries said Fayemi was playing politics with issues that have serious consequences on the state’s welfare.

In a report made available in The Nation newspaper, Fayose, in a statement by his Chief Press Secretary, Mr Idowu Adelusi, said he finds the recent appointments questionable.

The statement reads: “The questions the people should help ask Fayemi include which ministries the new permanent secretaries will be attached? Will two PS man a ministry? It is very ridiculous for Fayemi, who has less than two weeks to leave office to appoint permanent secretaries for the incoming administration. It shows how evil the APC is.

“It is evident that Fayemi does not love Ekiti State. His activities are not statesmanlike and honourable. Nigerians should now know that his activities are to put stumbling blocks on the path of the incoming government.”

However, Adelusi, in the statement revealed that the incoming government would review most of the policies taken in the twilight of the Fayemi’s administration.