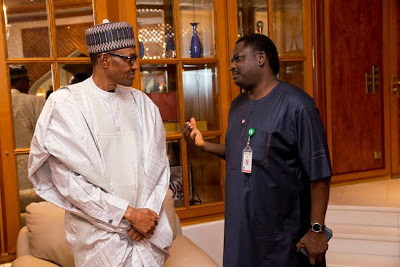 Instead of responding to the words of Eric Joyce, the former British MP who told the world via his twitter handle on 19th May that President Muhammadu Buhari had died in a London hospital, Deacon Femi Adesina, the Special Advisor to the President on Media, in an essay titled “They Learnt Nothing and They Forgot Nothing”, refused to clarify the matter and instead said that he was ready to follow Buhari “into battle blindfolded”.

Clearly my good friend Adesina has much to learn from an essay that yours truly wrote last week titled “The Language of Slaves”. I urge him to read it.

He also has a lot to learn from President J. Trump’s words when he said,
“In America we worship God and not Government. We are a nation of true believers”.

My advice to Adesina (and it is from the heart because he knows that I really do like him) is to firstly stop worshipping Government and secondly to seek the face of God on this matter.

In his essay Adesina claimed that Buhari is “not corrupt” yet what greater act of corruption can there possibly be than the imposition of one man’s will over 100 million people with the barrel of a gun. That is precisely what General Muhammadu Buhari did to Nigeria in 1983.

Sadly 30 years later and since his return to power in 2015 our country has seen more division, bloodshed, strife, stagnation, abuse of power, governmental impunity, economic decline, state-sponsored genocide, carnage and butchery, ethnic cleansing, extreme poverty, Fulani hegemony, Islamic domination, humiliation of the Church, murder of Christians, ethnic and religious tensions, slaughter of Shiite Muslims, butchering of northern minorities, marginalisation of southerners, humiliation of Middle Belters and reckless corruption in government than at ANY other time in our history since the civil war.

My advice to Adesina is to stop attempting to sell his “Buhari is the Messiah” gospel, rid himself of what Dr. Reuben Abati, the former Special Advisor on Media to President Goodluck Jonathan, recently described as “the Villa curse”, and move on with his life.

He should stop behaving like the stubborn fly that insists on following the corpse into the grave.

He should spend far more time seeking the face and counsel of the Lord and in deep introspection.

He should learn from the powerful words of Donald Trump’s inspiring speech which he delivered to Muslim leaders from all over the world in Saudi Arabia just two days ago when he told them that they must “drive out” the radical extremists and terrorists from their midst and warned them that “terrorists do not worship God, they worship death”.

1,000 Shiite Muslims were slaughtered and buried in mass graves by the military in one crazy afternoon over a year ago yet no-one has been brought to justice and instead their leader, Sheik El Zak-Zaky, has been detained, together with his wife, for over one year.

1000 people were butchered in Agatu in one afternoon some time ago by Fulani militias yet no arrests have been made.

Dozens of innocent men, women and children were butchered in Takum in Taraba state a few days ago and four more were killed in Southern Kaduna just six days ago, yet no arrests have been made.

Hundreds of opposition members, activists, bloggers, journalists and innocent citizens have been locked up and illegally detained for no just cause and against court orders.

Thousands of pro-Biafra IPOB members have been butchered and detained by security forces simply for saying that they want their own nation and that they wish to exercise their right of self-determination.

Remember the carnage that was unleashed by Fulani herdsmen in Osun, Abia, Enugu, Imo, Rivers, Plateau, Taraba, Ondo, Ogun, Lagos, Kaduna, Adamawa, Benue, Kwara, Kogi, Edo, Cross Rivers, Nassarawa and countless other states in the last few days, months and two years and yet no condemnations or arrests have been made by the Buhari administration?

Remember when he locked up judges and raided their homes in the middle of the night?
Remember when he sought to intimidate and criminalise the leadership of the Senate by charging them to court for spurious and bogus offences?

Remember that though we are meant to be multi-religious, multi-ethnic and multi-cultural plural state of over 170 million people, every single one of our security agencies and Armed Forces, except for the Navy, is headed by a northern Muslim.

Remember that Middle Belt and southern Nigerians are now effectively slaves and second class citizens in their own country.

Adesina would do well to remember that every soul is precious to God and that every life matters to Him.

The truth is that I don’t think anyone wants the President dead: they just want him to resign, to go back to Daura, to take care of his health and to properly hand over full power to his second in command.

I pray that my friend and brother Femi Adesina learns from this and spares us his inelegant lamentations and rancid rantings.