Abuja, March 3, 2016 (NAN) The Minister of Agriculture and Rural Development, Mr Audu Ogbeh, has assured Agatu people of Benue State that the government was working on measures to stop the invasion of communities by herdsmen.

Speaking to the News Agency of Nigeria (NAN) in Abuja, Ogbeh said that invasion and massacre of the indigenes by herdsmen was no longer acceptable to the government

He said that a formation of the Nigerian Army had been deployed to the communities to restore peace.

“Yesterday, I spoke with the Ministers of Defence and Interior and they assured me that they have deployed a military formation in Enugu to move in and restore peace in Agatu. 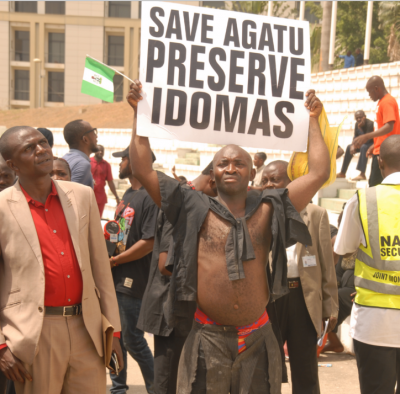 “Today, I will also be speaking with Mr President about this issue to ensure that the problem is solved once and for all.

The minister gave assurance that government was taking lasting steps to prevent cattle from grazing into peoples’ communities and farmlands.

He said that most of the rampaging herdsmen were from some neighbouring countries.

“We are producing massive hectares of grasslots for the consumption of cattle; we have received these grasses from Brazil and we are growing them in massive quantities.

“Cattle herdsmen want grasses for their cattle; such grass is what we are growing in large quantities and, within the next three months, some of these will be ready.

“Most of these men are not Nigerians; they come in from places like Chad.

“Recently, I was in Berlin and I met the Minister of Agriculture from Congo, who complained to me that some Chadian herdsmen also invade some communities in Congo to commit similar havocs.’’

He added that government was in the process of enacting a legislation that would control cattle grazing in unauthorised areas.

“We are also sending a bill to the National Assembly to legislate that cattle should no longer roam in our cities and villages.

“We will equally raise the issue at the level of the African Union, to compel member-countries to take steps to prevent their herdsmen from grazing into neighbouring countries.

“It will be a major international crises if we do not stop it now,’’ Ogbeh said. (NAN)