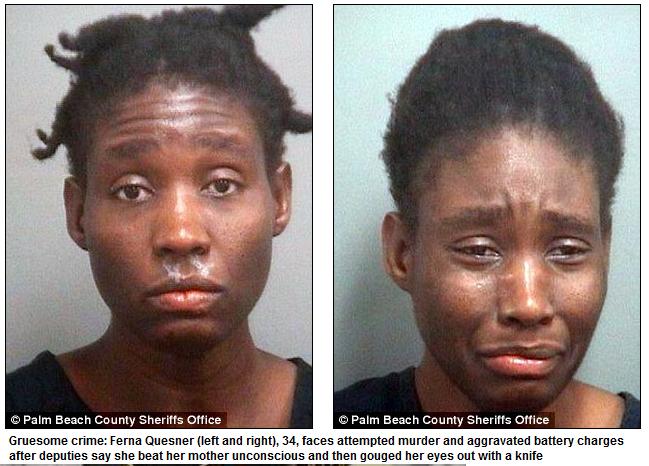 A mentally disturbed Florida woman is behind bars on an attempted murder charge after police say she savagely beat her mother with a metal pole and weight before cutting her eyes out with a kitchen knife.

Ferna Quesner, 34, of Lake Worth, was arrested on the night of July 4 on charges of attempted murder and aggravated battery following the gruesome attack that has left her 59-year-old mother blind and fighting for her life.

Officials say Blonia Quesner suffered a broken nose, two broke forearms, bleeding into the brain, and had both her eyes gouged out.

According to a newly released arrest report cited by the station WPTV, responding deputies found Ferna Quesner standing over her mother’s body in a white T-shirt soaked with blood.

Pointing at the badly beaten woman lying on the ground, Ferna allegedly told the officers: ‘I was trying to kill the cat, and she is the cat.’

The gruesome tragedy played inside the Quesners’ apartment in the 4500 block of Gulfstream Road last Thursday.

Neighbors reportedly witnessed how 34-year-old Ferna Quesner dragged her mother by her hair into their home while carrying a white pole. Blonia Quesner was said to be struggling, but she was ultimately overpowered by her daughter.

The arrest report states that the door closed behind the two women, and nearby residents could hear screams coming from the apartment at 4556 Gulfstream Road. Crime scene: The family tragedy played out on the Fourth of July at 4556 Gulfstream Road in Lake Worth

Just minutes later, the 34-year-old suspect emerged from the house with blood on her shirt.

Deputies who arrived at the scene entered the women’s home, only to discover a pair of human eyes lying on the kitchen floor in a pool of blood. A knife presumably used in the attack was found nearby. Gory details: An affidavit described a gruesome scene a the Quesners’ home, with blood covering the walls (pictured)

A gravely injured Blonia Quesner was lying on top of a broken lampstand that her daughter had allegedly used to beat her unconscious, the affidavit stated.

While executing a search warrant in the one-story Lake Worth house, investigators discovered a bloody 10-pound weight on the dining table.

According to the report, the walls and ceiling of the apartment were spattered with blood.

As she was being taken into custody, Ferna Quesner told deputies, ‘I don’t want to go to prison.’ Ignoring her protestations, the officers booked the woman into the Palm Beach County Jail, the Sun–Sentinel reported.

Miss Quesner has been struggling with mental health problems over the years and has a history of violent behavior.

According to court records cited by the paper, the woman has been the subject of four hearings between 2001 and 2013 under the Florida Mental Health Act.

Last February, she was arrested on a count of battery following an incident involving her roommate, but the charge has been dismissed.

Investigators say that if Blonia Quesner succumbs to her injuries, the first-degree attempted murder charge against her daughter would be upgraded to murder.  Source