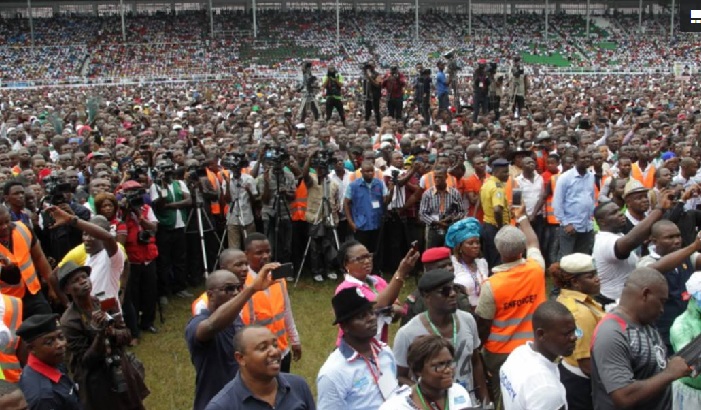 Worried by the massive turnout of citizens at a Port Harcourt mega-rally that brought some 40,000 residents of Port Harcourt together yesterday, President Goodluck Jonathan has warned Governor Rotimi Amaechi to stop what he called “political rascality and blackmail.”

In a statement issued from Israel where the President and his supporters are currently on pilgrimage, President Jonathan accused Amaechi of sundry offenses including mismanagement and corruption.

Governor Rotimi Amaechi took his obnoxious willingness to denigrate the highest office in the land in a reckless bid to advance his selfish political interests to a new level of irresponsible and rascally behavior yesterday in Port Harcourt with his totally false and baseless vituperations against President Jonathan, the First Lady and the Federal Government.

It appears from the Governor’s completely unfounded and off-the-mark allegations that he had totally lost all sense of propriety, decorum and responsible political behaviour and resorted to unacceptable demagoguery, libel, blackmail and incitement of public disorder.

Unless his unbridled ambition and desire for self- promotion have completely befuddled his mental faculties and caused him to totally lose touch with reality, Governor Amaechi must know that his claims and allegations are untrue.

We can only assume therefore that he is deliberately spewing malicious falsehood in a desperate effort to incite the people of Rivers State and Nigeria against his assumed political foes.

We warn him that there are legal, constitutional and moral limits to political rascality beyond which he will not be allowed to go without repercussions.

The immunity which he currently enjoys notwithstanding, Governor Amaechi should be under no illusions:  A day of reckoning will surely come when he will answer for all his actions and false allegations against President Jonathan, the First Lady and the Federal Government.

He should also know that Nigerians are aware of the truth and will never be fooled or swayed by his arrant opportunism and anti-Jonathan rantings.

Nigerians know that while Mr. Amaechi falsely accuses others of corruption, he cannot show or explain to the people of Rivers State what he has done with the billions of Naira that has accrued to the state under his tenure.

They also know that while Amaechi continues to falsely accuse the Jonathan Administration of having done nothing for Rivers State, he has recklessly squandered huge state resources on dubious, vainglorious projects or self aggrandizement.

Nigerians will know too that while he falsely alleges that Rivers and other states have not received funds due to them from the Federation account, the only outstanding allocation was for September, which was released to all states well over a week ago.

The Governor should stop trying to make President Jonathan the scapegoat for his woeful performance in Rivers State and look to his own very apparent failings and incompetencies.

He should also stop blackmailing the First Lady who has demanded nothing from him other than good governance, justice, equity, fairness, real development and progress in Rivers State.