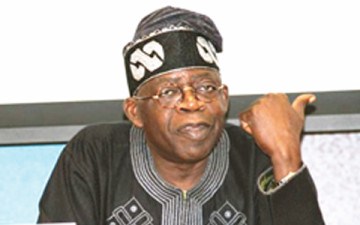 Fuel Crisis: What Does Tinubu Want?

Whatever All Progressives Congress (APC) National Leader, Asiwaju Ahmed Bola Tinubu saw to make him attempt killing a fly with a sledge hammer must have really been something to dance naked over. In a clear departure from convention, Tinubu indirectly criticised the government presided over by his own political party, the APC when he took a swipe at the Minister of State for Petroleum, Dr Ibe Kachikwu.

Kachikwu’s crime against Tinubu was that he expressed his frustration with the unrealistic expectations all around that the rot in the oil industry that causes the perennial fuel scarcity will disappear overnight or that the cabal behind the rot will not resist efforts at sanitizing the industry. It will definitely take magic or something bothering on witchcraft to achieve what citizens expect within the timeframe they want – which is immediately.

Of course, anyone who has had the misfortune of wasting valuable time on the fuel queues or forking out fortunes to buy petrol at the killer black market prices would feel stung by any comment that offered no immediate remedy. Criticising such comment would be second nature but for such criticism to come from someone like Tinubu is an aberration that should have called for the Stephen treatment, you don’t come around pontificating about a problem you have been a part of.

The Goodluck Jonathan administration was emboldened to wreck the industry because it was confident the then opposition was in his pocket considering the several clandestine and nocturnal meetings to which the APC leader, then Action Congress of Nigeria (CAN) leader was regularly ferried. These meetings were not about telling the Jonathan government to rein in corruption or to stop the rot in the oil industry; they were to negotiate how he can ensure his nest was equally feathered from the sleaze going on at that time. He was the willing to hold similar secret meetings with the former Petroleum Minister, Diezani Alison-Madueke, whose name today has only one connotation with Nigerians.

ConocoPhillips is a stark reminder to Tinubu not to attempt denying his involvement in the oil industry corruption which is directly responsible with the dire straight we are in currently.

Even as a partaker in the shame of the petroleum industry, Tinubu could have quietly penned his caustic observations as a communication to Mr President and spared the nation the theatrics of that his ‘Kachikwu Needs to Know That Respect and Good Performance Will Do What Magic Cannot’ statement. The statement came out making the APC leader look like he has finally found and finished grooming a stooge to replace Kachikwu. What he has done is to open up his party and its government to ridicule by helping the present opposition do its job, hopefully, he is not addicted to being in the opposition or criticising for the sake of it.

The other take away from the statement is that it reinforces the several insinuations that Tinubu is smarting from losing out in the power equation since President Muhammadu Buhari came into office. (While he was partly instrumental in turning around the fortunes of the former opposition party he should also accept the impossibility of being the one to fill all appointive posts.) Attacking Kachikwu the way he did is then a way of hitting back against President Buhari, who has been severally reported as rebuffing Tinubu’s overbearing intrusion.

Furthermore, had Tinubu been a tad patient, he would have successfully hidden the fact that his is the hand behind the puppets demanding Kachikwu’s resignation on behalf of the oil cabals. But on this score, Jagaban as he is popularly called should have known better that Nigerians, most of whom appreciate the changes the Minister of State for Petroleum has brought about, are not ready to see Kachikwu go. Instead they want to see a Kachikwu that is left alone to continue with the reforms in the oil industry. The people they want to see go and certainly tried, convicted and thrown in jail are members of the oil cabals for whom Tinubu is now the official spokesperson.

The other thing Tinubu should note is that Kachikwu’s exit, if we ever get to that sorry pass, would not translate into one more slot for his cronies, because Nigerians will do the vetting for any replacement if that ever happens and a Tinubu marionette would not get the clearance to step in. Allowing that would amount to returning our collective future back to the oil cabals with more ConocoPhillips deals to sour our lives.

By now, Tinubu should realise that while Lagos state, where he remains the emperor absolute, is a microcosm of Nigeria, Nigeria is not Lagos state. He has held that hostage for as long as is tolerantly possible but he lacks the stamina or the clout to expand his fiefdom to cover the whole of Nigeria where the average sophistication exceeds the best of his strategies.

So Tinubu must recognize and accept the glaring reality that he cannot unseat Kachikwu. What he can immediately do include placing a personal call to the minister to eat the humble pie. He can then go a step further by spilling the proprietary secrets of the cabals that can be used for taming the corruption in the oil industry since he has inside scoop on how things go down. He is of course free to throw in suggestions that can make the industry function better since this should ordinarily be an obligation for citizens.

For Kachikwu, this should be a lesson on the reach of the cabals. They permeate all facets of our national life and have access to all levels and arms of government. They have following and retain influencers with cult following that could be deployed once their interests are being threatened. The braying is just revving and would get louder but this should not take his eyes off the ball.

Suleiman is a public affairs commentator based in Kaduna.