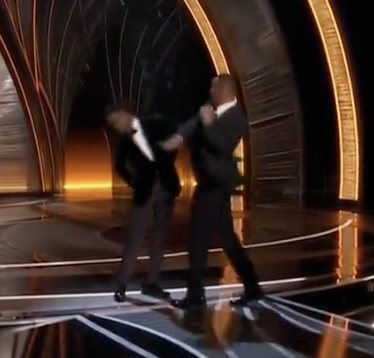 If this was’t staged.

Apparently not willing to take any more insults, Will Smith placed a very sound smack on comedian Oscar host Chris Rocks head for cracking a joke about his wife.

Jada who appears to be battling with alopecia pathologic hair loss has shaved her head bald. The root of Chris’ joke.

Will walked swiftly to the stage, a good several meters and landed a sound one on Chris’ face. The comedian laughed, “wow…wow…Will Smith just smacked the ish out of me.”

As Will sat back he yelled at the host, “Get My Wife’s Name Out Your ‘F**king Mouth”

WARNING: Video Not Safe for Kids!

VIA JAPANESE TELEVISION: The uncensored exchange between Will Smith and Chris Rock pic.twitter.com/j0Z184ZyXa

Chris defended, “it was a JI Jane joke,” as Will repeated his warning.

“I am going to,” Chris promised, wiggling his face with a burning cheek, “that was the greatest night in television,” he ended.

It’s recalled that after their marital entanglements were made public, Will did not respond pleasantly to ridicules by 50 cent either, on twitter.

The hit was mostly censored on US TV but seen in full abroad.

Will later gave a blanket apology on stage.

Will Smith’s award acceptance and apology