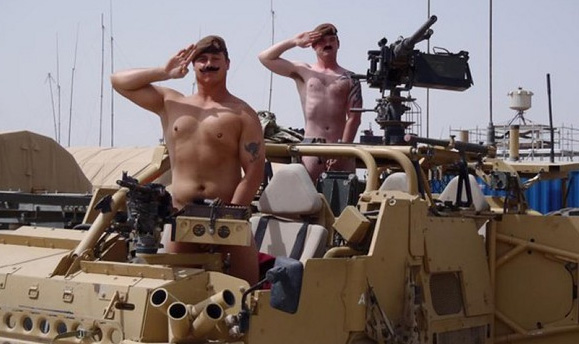 NewsRescue– In what can be described as dangerous madness, soldiers whose morality is an essential requirement due to their duty to defend, have engaged in photo shoots of nakedness in solidarity with Prince Harry, the Queen of England’s son.

August 22nd, 2012 Prince Harry put the crown jewels on display in Vegas this weekend … getting BARE ASS NAKED during a game of strip …

SCORES of British soldiers and their wives are risking Army anger by stripping off and saluting to show support for Prince Harry, and posting the pictures on Facebook.

As the troops get naked to copy Army comrade Prince Harry’s nude Vegas party pose, their wives and girlfriends are getting in on the act too.

They are borrowing their boys’ uniforms and performing ‘naked salutes’ either totally nude or in varying states of undress.

They are among over 13,000 who have joined a military Facebook group called ‘Support Prince Harry With A Naked Salute’.

Several declared themselves terrified about baring themselves in public – but determined to send their message of support for Harry.

The Prince is expected to be reprimanded when he returns to the Army Air Cops in a few weeks time.