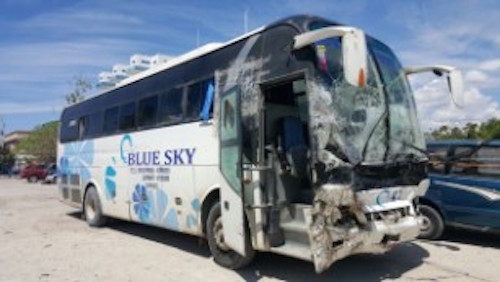 By Handy Tibert and Ryan Prior,

(CNN) At least 38 people were killed and 13 others injured in northern Haiti after a bus plowed into a festival crowd before dawn Sunday, in what local authorities said was a hit and run incident.

The bus, owned by the transportation company Blue Sky Logistics, was carrying people from the northern Haitian city of Cap Haitien to the nation’s capital, Port Au Prince. The bus encountered streets crowded with revelers celebrating Rara, a popular festive season in Haiti that stretches from Mardi Gras until Easter Sunday.

Just outside the city of Gonaives, the bus struck two pedestrians, one of whom died instantly. The bus driver continued on for several miles before encountering a Rara band playing music in the middle of the road. The bus plowed through the first group of musicians, then drove through a second and a third band.

The driver fled the scene on foot and is still at large, police said. Authorities are actively searching for him.
According to one eyewitness, people were still trapped under the bus when it finally stopped. “You could see bodies missing arms, bodies with stomachs out, and a trail of blood on the ground,” a man named Rigorov, who lives in the area, said. “You could hear people crying and calling for help, but I could not make a difference on who is alive and who is not.”

Angry survivors tried to set the bus on fire while passengers were still inside, police said, but officers intervened and prevented them from doing so.

Handy Tibert reported from Haiti and Ryan Prior wrote from Atlanta