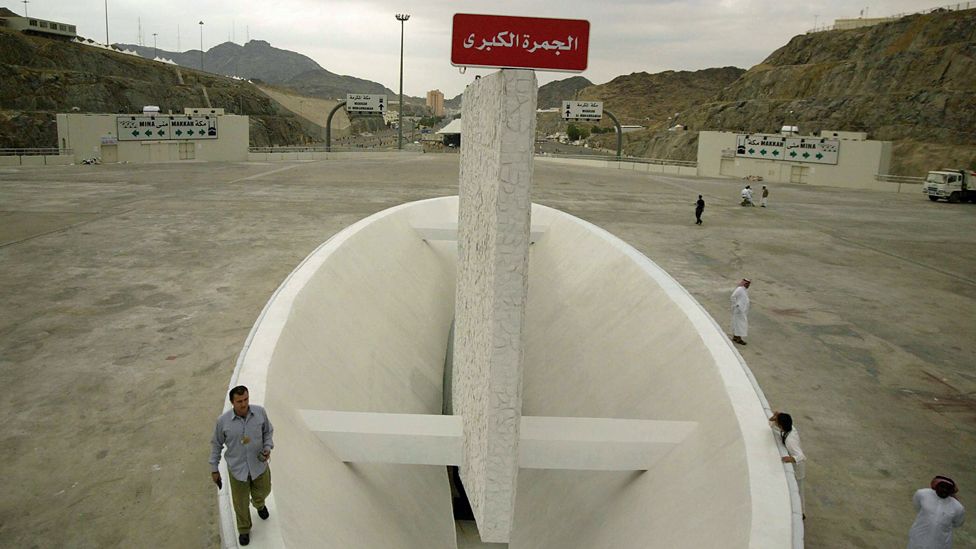 In what is seen by some as a conspitracy to protect Satan, the Saudi Arabian government totally changed the appearance of Jamarat site where the devil is stoned during pilgrimage, replacing the origial satan obelisk marker which had been there for over a thousand years with a pretty wall in a state of the art building.

On the first day of hajj, pilgrims set out for Mina to spend a night there before leaving at sunrise on the 8 mile (13km) journey to Mount Arafat. At sunset, pilgrims travel to Muzdalifah where they gather stones and pray till the journey back to Mina at sunset, where they throw seven stones at the largest of three Jamarat pillars, which stand at the place where Satan is narrated to have tempted Prophet Ibrahim (Abraham) three times. Pilgrims then go to Mecca, return to Mina and throw more stones then set off back to the Grand Mosque at Mecca. Throwing stones at satan is an important part of the pilgrimage. The historical significance of Jamarat ritual hails from Prophet Ibraheem when the devil appeared to him three times. At each of the appearances, Angel Jibraeel (Gabriel) told Prophet Ibrahim (Abraham) to pelt the devil. Thus, the basis of the significance of the ritual.

How It Used To Look 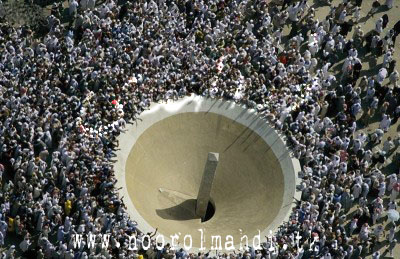 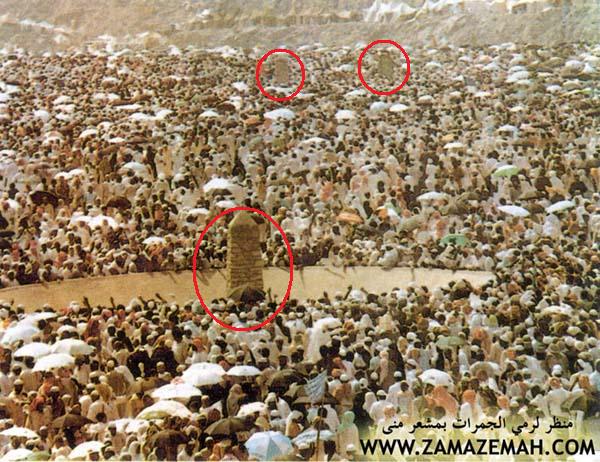 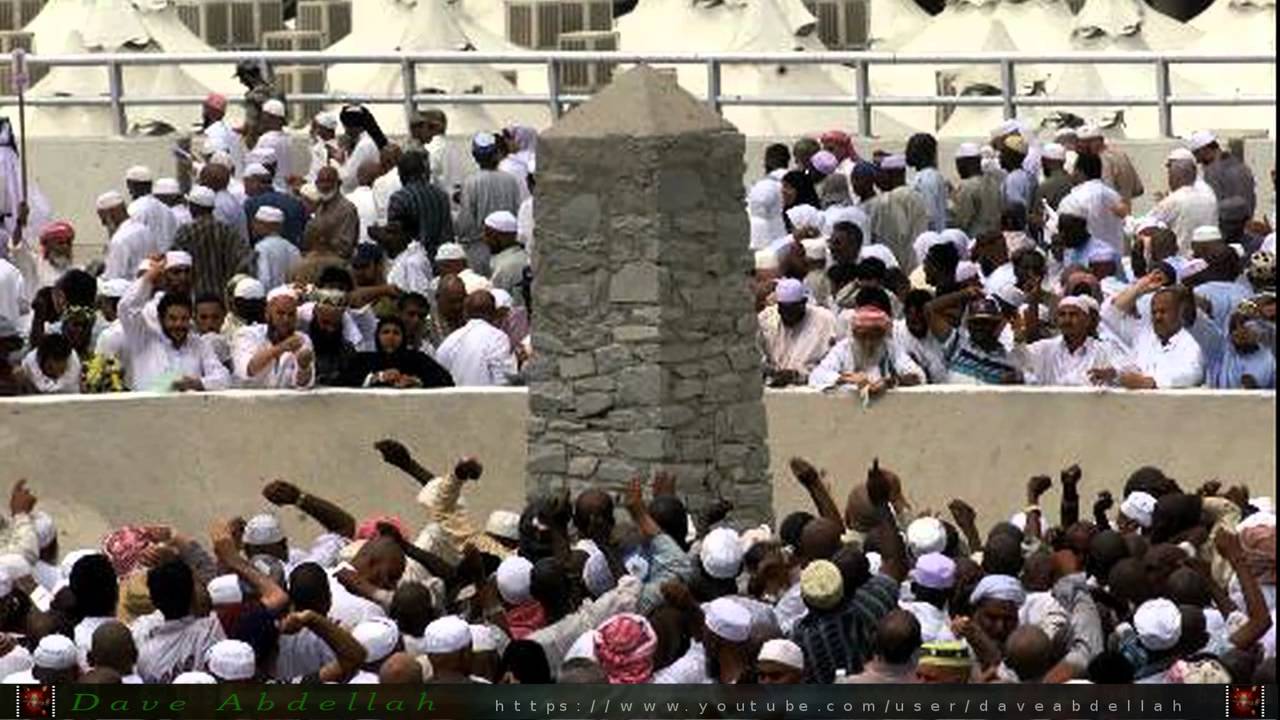 Many commentators say the Obelisk is a symbol of Satan and it is seen as an illuminati prize across the world as an affirmation of this. They thus complain on why the Saudi government in 2004 decided to replace the obelisk with a wide wall. While some say it is the area that matters, others believe the obelisk is important and that the renovations are a scam to conceal and protect satan.

A hadith states that the end of the world will not come till the hajj pilgrimage is abandoned. The pilgrimage abandonment may be symbolic if all processes therein are replaced with opposites.

Shu’ba narrated that the Prophet  صلى الله عليه وسلم  said: ” The Hour (of Resurrection) will not be occur till the Hajj (Pilgrimage to Mecca) is abandoned.” (Bukhari) 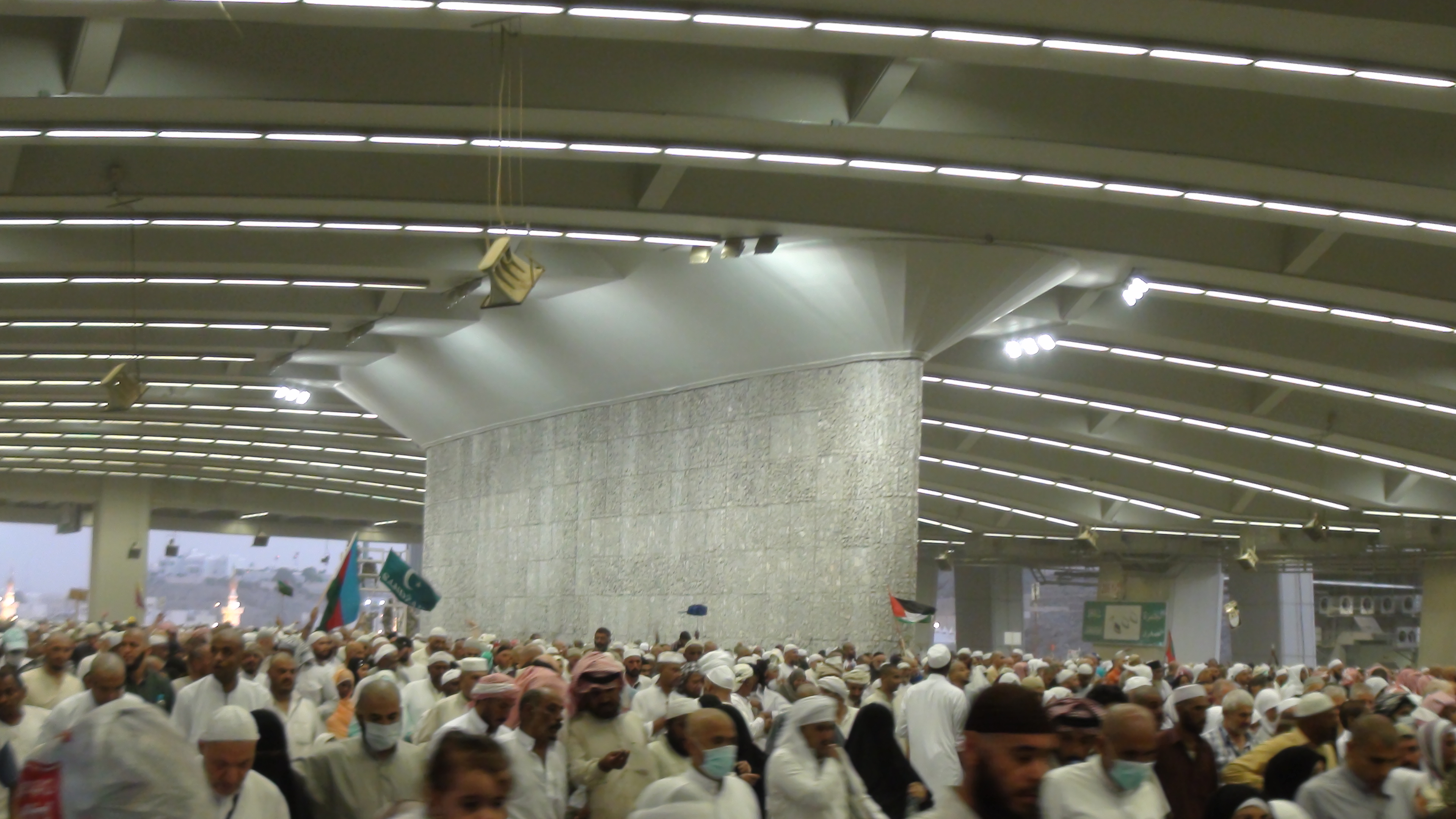 Other excuses for the innovations are that people used to stone each other occasionally from one side to the other. One would think that nets could easily have been used to protect this from happening during the busy pilgrimage. The fancy structures built by the Bin Laden construction group just do not maintain the essence of the hajj.

Surprisingly a new obelisk, which according to illuminati science refers to the phallus of satan, has been erected at Arafat where the prophet of Islam is mentioned to have given his last speech.

Obelisks are seen around the world in locations believed to be related to illuminati centers, like Washington DC and many others. They are symbolic of the devil and occult. This why an obelisk is an expected figure at Jamarat and not at Mount Arafat.

And it goes on and on. Phallic worship was part of ancient polytheist religions that we muslims clearly know have heavy satanic influence, what’s surprising is that the prophet (pbuh) ordering everyone to stone a phallic obelisk 7 times during Hajj, stating that you are attacking satan when doing this practice. This was the ‘Jamarat’ before the deconstruction and reconstruction, this small monument was stoned by muslims for more than a thousand years, its shape is identical to the monuments in the world’s powerful cities (Washington, London, New York, Paris, Rome etc…)

What surprised me is that in 2004, the Saudi authorities decided to blow up this obelisk and then replace it with three walls that are to be stoned

And in the process they placed an obelisk on top of Arafat where people inscribe their names and hold onto it like it’s some kind of relic, at the time of the prophet there was no monument ontop of Arafat, if anything were bid’a it is the removing of the original jamarat that had the shape of the satanic obelisk and replace it with a wall, and then placing a obelisk on top of Arafat, that can constitute as a Bid’a.

There are many questions to ask here. Allah knows best.