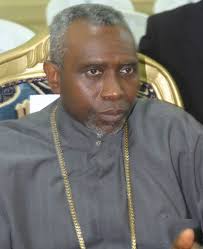 The Chairman, Governing Council of National Human Rights Commission, Prof. Chidi Odinkalu, has described as excessive the number of security agents attached to the President of the Christian Association of Nigeria, Pastor Ayo Oritsejafor.

He wondered why the president of Christian Association of Nigeria would move about with a large number of security operatives, whom he alleged oppressed motorists in Abuja, including himself.

In a report made available in The Punch, the human rights crusader said this at a lecture at a youth-based forum titled, ‘The Platform Nigeria’, which was convened by Pastor Poju Oyemade of the Covenant Christian Centre in Lagos, on Wednesday.

Prof. Odinkalu said: “I was driving on the road one day when I saw a large number of Soldiers, Policemen and Civil Defence in a convoy. I thought it was a governor or President that was passing by because the security operatives pushed my vehicle aside.

“I was surprised to discover that it was the president of CAN and I even tweeted about it the other day.”

He said it was unfortunate that motorists were being oppressed by those in power and those who ought to be on the side of the masses. Prof. Odinkalu said Nigeria’s style of politics and the nonchalant attitude of the masses were to blame for the country’s prolonged decay.

The topic of the lecture which was televised live on Channels Television, on Wednesday, was “Saying no to the right to impunity.”

“Today almost every state government would want Alhaji Aliko Dangote to invest and pay tax to it. However, the moment Dangote says he wants to run as a senator, they will ask him if he is an indigene. This should not be so. I am happy that Lagos is different in this regard,” he said.

“Why do you call them Excellency or honourable? Call them governor, call them senator. It is called public service. If there is no public, there will be no service,” he stressed.

He said it was unfortunate that even as the country marked its independence, many towns had been seized by terrorists.

Odinkalu berated the Federal Government for failing to send a delegation to visit prominent Islamic cleric, Sheikh Ibrahim El-Zakzaky, whose three sons were killed by soldiers in an extra-judicial manner.

When Punch called Pastor Oritsejafor on phone, the CAN president said he had no response to Odinkalu. “Please I don’t know what you’re talking about, I have nothing to say,” he said.