Nigeria witnessed a Babangida/Abacha era type helicopter assassination of the former National Security Adviser, General Andrew Owoye Azazi in December of 2012, shortly after the NSA had dared to reveal and implicate the ruling PDP party in the sponsorship of Boko Haram.

The late General Azazi had said at the South-south conference:

The extent of violence did not increase in Nigeria until there was a declaration by the current president that he was going to contest. PDP got it wrong from the beginning, from the on-set by saying Mr A can rule, Mr A cannot rule, Mr B can rule, Mr B cannot rule, according to PDP’s convention, rules and regulation and not according to the constitution {applause}and that created the climate for what has manifest itself, this way. I believe that there is some element of politicization. is it possible that somebody was thinking that only Mr. A could win, and if he did not win, there will be problems in this society.

Let’s examine all these issues to see whether the level of violence in the North East just escalated because Boko Haram suddenly became better trained, better equipped and better funded, and in any case how did they get it all done…{warning of Boko Haram becoming snipers – who could potentially target elite}

But, then I must also be quick to point out that today, even if all the leaders that we know in Boko Haram are arrested, I don’t think the problem would end, because there are tentacles. I don’t think that people would be satisfied, because the situations that created the problems are not just about the religion, poverty or the desire to rule Nigeria. I think it’s a combination of everything. Except you address all those things comprehensively, it would not work”

General Andrew Azazi was subsequently fired later that year and killed in a suspicious helicopter explosion before the year ended. 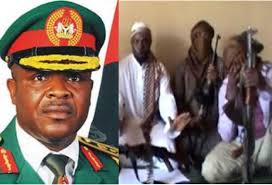 Did the former army General order the murder of NSA Andrew Azazi to stop him from further incriminating the true sponsors of the terror organization?

Nigerians must demand a full scale inquiry into all the atrocities and acts of terror supervised and sponsored by the former head of the nation’s army and the death of Andrew Azazi.