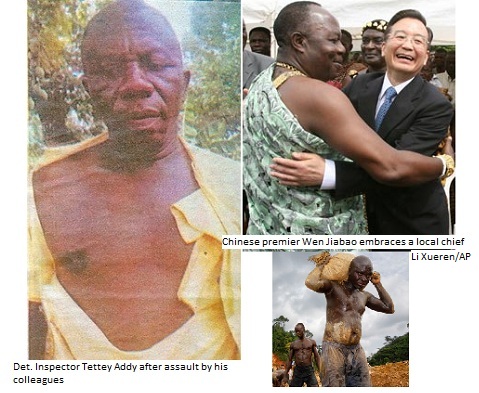 NewsRescue– For several years now and in several news stories, the activities of illegal Chinese gold miners has been an important feature though never receiving the proper attention such grave atrocity deserves. In July, it was reported that illegal Chinese miners actually opened fire on protesters at an illegal goldmine at Manso-Nsiena in the Amansie West District of the Ashanti Region in. In another case recently, police actually beat up a Ghanian policeman who attempted to apprehend Chinese illegal gold miners.

Ghana is Africa’s second largest gold producer after South Africa. Mali, another nation where global interest is glaring in the face of the “opportunity” created by Chaos, is Africa’s third largest gold source. See: NewsRescue– Mali, Land of Gold and Uranium: UN Prepares to Send in ECOWAS Troops

Here’s the story and scroll down for video at the bottom:

A police detective who embarked on an operation to arrest illegal miners in the Manso area of the Ashanti region, had the shock of his life when a team of policemen, who should have instead assisted him, attacked and brutally assaulted him.

Accusing him of embarking on an unlawful operation, the policemen mercilessly beat up their colleague, Detective Inspector Richard Narh Tettey, and set free the nine suspects, including six Chinese, whom he had arrested during his operation.

After the beatings, the team bundled Inspector Tettey and locked him up in cells at the Bekwai Police Station for hours.

This was in spite of the fact that Inspector Tettey insisted that he was duly detailed to effect the arrest of the illegal miners.

A source at the Ashanti Regional Police Command which disclosed this to the Ghanaian Times said that even though Insp. Tettey identified himself as a policeman and maintained that he was on lawful duty, they beat him up and set the illegal miners free.

Detective Insp. Tettey when contacted, explained that he was assigned by the Ashanti Regional Police Command last Thursday, to undertake an operation in the Manso area of the Amansie West District of Ashanti where some Chinese and Ghanaian illegal gold miners, popularly called ‘galamsey’ operators were said to be destroying vast lands in the area.

After he had arrested the suspects, however, he was confronted at Manso Mim junction by his colleague policemen from the Manso station, who subjected him to severe beatings.

At the moment, the Ashanti Regional Police Command is tightlipped over the matter.

Inspector Tettey, attached to the Ashanti Regional Police Criminal Investigations Department (CID), declined to give further details because the case was being investigated.

However, he insisted that the assignment was official and that it was booked in the station diary both at the CID office and the Buffalo Unit, adding that it was the Deputy Regional Crime Officer, Assistant Superintendent of Police Kingsley Aboagye who got wind of it and intervened for his release from the cells at the Bekwai police station.

Some inhabitants of the area alleged that the ‘galamsey’ operators were in league with the Manso District Police Command.

Efforts by the Ghanaian Times to contact the Manso District Police Commander, Superintendent Stephen Kwakye, for comments were fruitless.