Like most of you, I was in disbelief when I first read the quote above. I decided to verify it by purchasing the copy of Open Heavens from which the quote was taken (fully referenced above). I was shocked by what I found out – here is a flavor:

1). If you want returns in Dollars, sow in Dollars. Do not sow in Naira and be expecting a harvest in Euro. It does not work like that.
2). It is the particular denomination that you use that God will multiply and return to you.
3). Do yourself a favor by using the biggest denominations so as to get the greatest harvest.

For the reader’s convenience, I have captured the entire exhortation in three screenshots. 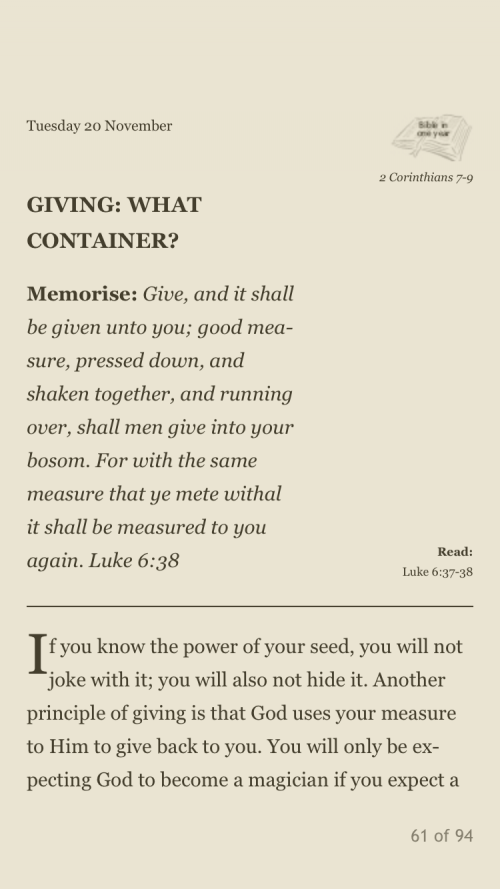 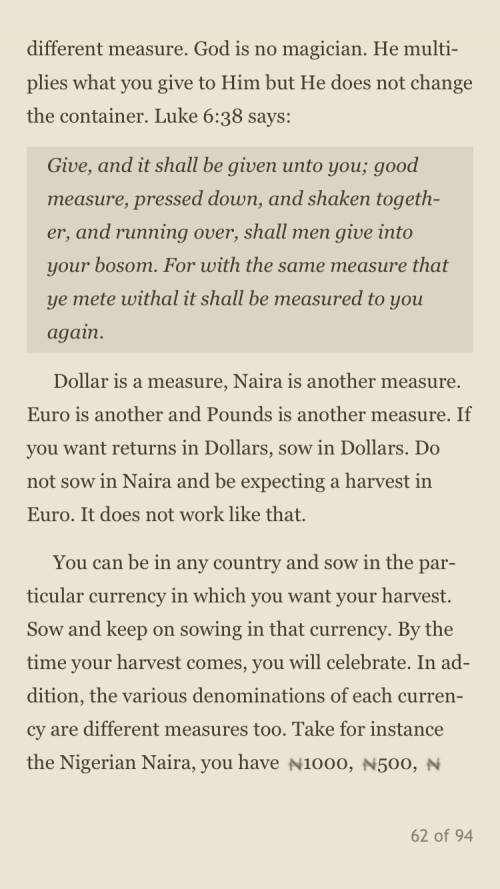 A friend of mine wrote: “The only way to sell a lie is to hide it between two truths.” As these screenshots show, Adeboye’s exploitative message is cunningly sandwiched between mostly benign exhortations and does not appear until the month of November, right towards the end of his book. 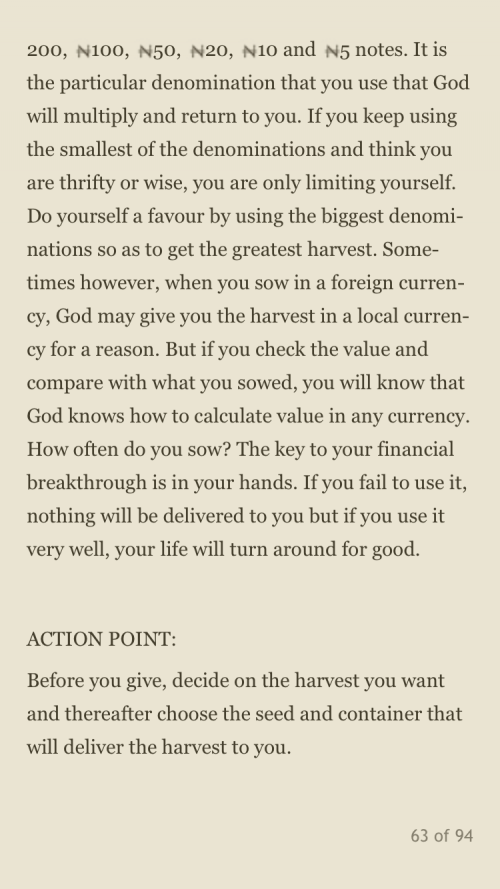 What exactly does an all-sufficient God need money for? Oh yeah, He needs it to fuel Adeboye’s private jet. Adeboye and his fellow pastorpreneurs can resurrect dead people and cure every disease known to man, but they cannot cause money to appear from thin air to pay for their extravagant lifestyle – they need your money for that.

How can anyone justify buying a private jet with the donations of people who cannot send their children to school, afford hospital bills or even eat three square meals a day? The pope does not own a private jet even though he heads the largest church in the world. Neither does the British Prime Minister, the head of one of the most powerful countries in the world. It is difficult to see that our jet-flying pastors have more important jobs than these individuals. As I said in aprevious article, their message lacks the power to transform our society. Corruption and poverty remain endemic in our society although there is a church or a mosque on practically every Nigerian street. What then is so urgent and special about their message that requires a private jet to spread around the world?

If this were truly about spreading the gospel of Jesus then where better to fly to than Pakistan, Iran, Afghanistan, Yemen and Somalia? Perhaps, the witches and demons in the airspace over these countries will not grant our Holy Ghost-filled pastorpreneurs permission to land their jets. It seems the ones in the U.S., U.K. and the rich countries of Europe are so impressed by our pastorpreneurs they have signed a memorandum of understanding which grants open access to the airspace over these countries.

The fear of witches, demons, evil spirits, generational curses, and the threat of eternal punishment in hell fire is a potent tool in the hands of charlatans to maintain their control over gullible people. It is in their interest to garnish and perpetuate these myths because the continued success of their trade is reliant on the pervasiveness of these myths in society.

Indeed, it is easier to deceive than to convince gullible people that they are being deceived. Harriet Tubman said: “I freed a thousand slaves. I could have freed a thousand more if only they knew they were slaves.” In my view, only those who have been mentally enslaved by Adeboye and his fellow pastorpreneurs will defend the screenshot sermons, and they cannot be freed until they have come to this realization.

Ijabla is a medical doctor and a humanist. He writes from the U.K. and can be reached at [email protected]. You can follow him on Twitter: @ijabijay.