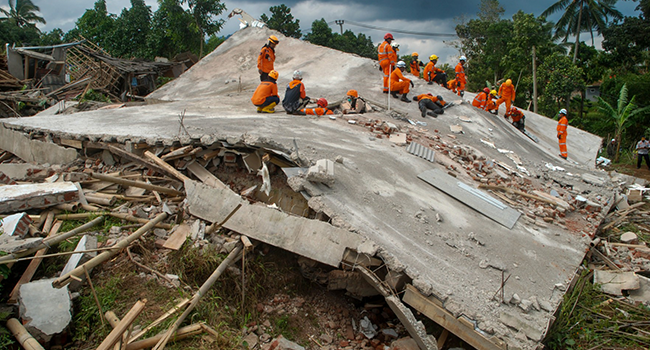 The death toll from an earthquake on Indonesia’s main island of Java jumped to 268 on Tuesday, as rescuers searched for survivors in the rubble and relatives started to bury their loved ones.

As body bags emerged from crumpled buildings in Indonesia’s most populous province, West Java, rescue efforts turned to any survivors still under debris in areas made hard to reach by the mass of obstacles thrown onto the roads by the quake.

The epicentre of the shallow 5.6-magnitude quake on Monday was near the town of Cianjur where most of the victims were killed, hundreds were injured and dozens feared trapped as buildings collapsed and landslides were triggered.

The death toll jumped dramatically again later on Tuesday from 162 to 268, Suharyanto, the head of Indonesia’s national disaster mitigation agency, or BNPB, told a press conference.

At least 151 people remain missing and more than 1,000 have been injured, said the official, who like many Indonesians goes by one name.

“The focus is still on the search and evacuation of victims. That’s the priority,” he said. “When the emergency response ends, hopefully everyone has been found.”

At a burial in a village near Cianjur, relatives of 48-year-old victim Husein, who was killed while building a house when the quake struck, broke into hysterical wails before his body was lowered into the ground.

“I just lost a brother 10 days ago. Now I’ve lost another brother,” said his sister Siti Rohmah as she sobbed uncontrollably.

“I kept waiting, hoping he would survive and that nothing bad would happen to him.”

One of the dozens of rescuers, 34-year-old Dimas Reviansyah, said teams were using chainsaws and excavators to break through piles of felled trees and debris to find survivors.

“I haven’t slept at all since yesterday, but I must keep going because there are victims who have not been found,” he said.

Drone footage taken by AFP showed the extent of a quake-triggered landslide where a wall of brown earth was only punctuated by workers using heavy machinery to clear a road.

President Joko Widodo visited the area on Tuesday, offering compensation for victims and ordering disaster and rescue agencies to “mobilise their personnel