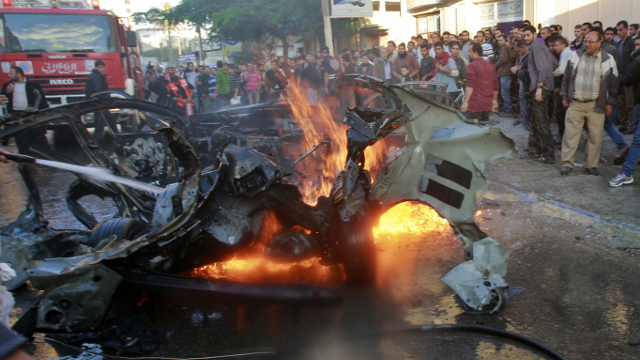 The Israel Defense Forces didn’t just kill Hamas military leader Ahmed al-Jabari on Wednesday as he was driving his car down the street in Gaza. They killed him and then instantly posted the strike to YouTube. Then they tweeted a warning to all of Jabari’s comrades: “We recommend that no Hamas operatives, whether low level or senior leaders, show their faces above ground in the days ahead.”

The Jabari hit is part of the biggest assault the IDF has launched in more than three years on Gaza, with more than 20 targets hit. And it’s being accompanied by one of the most aggressive social media offensives ever launched by any military. Several days before Jabari’s elimination, the IDF began liveblogging the rocket attacks on southern Israel coming from Gaza. Once “Operation Pillar of Defense” began, the IDF put up a Facebook page, a Flickr feed, and, of course, a stream of Twitter taunts — all relying on the same white-on-red English-language graphics. “Ahmed Jabari: Eliminated,” reads a tweet from 2:21 p.m. Eastern time on Wednesday.

This is a very different way of waging the war of opinion online. When an American drone strikes a suspected militant in Afghanistan, that footage is rarely made public — and, if so, only months after the fact. After the raid on Osama bin Laden’s compound, White House and Pentagon aides did start leaking details like mad. But the only live tweets from the operation were from a bystander in Abbottabad who heard the helicopters landing. And the pictures of bin Laden’s corpse were purposely kept from the public.

But Israel also finds itself in a singular position, geopolitically. Its most consistent ally in the region, the Mubarak regime in Cairo, was overthrown last year and replaced by an Islamist government. Relations with Jerusalem’s most important partner, the United States, were tested by Prime Minister Benjamin Netanyahu’s all-but-open support of Barack Obama’s rival Mitt Romney in the recent American presidential elections. The need to shape international opinion and rally supporters internationally is acute.

“I believe the video is aimed to deliver three different messages to three different audiences,” emails Gabriella Blum, a professor of international law and international conflict management at Harvard Law School. “A warning to militants in Gaza (we can get you anywhere, anytime); an appeasing message to the Israeli public (we will not remain helpless in the face of repeated rocket attacks), and a reassuring message to those concerned about the use of targeted killings, especially for its potential collateral damage (we can do this with utmost precision).”

During the last major assault on Gaza — 2009′s “Operation Cast Lead” — the IDF did embed camera crews in its combat units. But they were there primarily to defend troops against accusations of war crimes. Drone strike footage was shown to reporters, but only days after the attacks. Meanwhile, a young Israeli soldier — born in a small town in Hawaii, and converted to Judaism at Yale — got together with another American Israeli who thought it’d be cool to share some of those videos online. That became the IDF’s official YouTube channel, unexpectedly generating millions and millions of views. But social media (and information operations, generally) remained on the periphery of Israeli planning.

This time, things are different. After spotting a long-range Fajr-5 rocket in an underground launch site, the IDF quickly uploaded the surveillance footage to YouTube (see above), and tweeted a Google Maps-style picture of the launcher’s location in the town of Zeitoun. After killing Jabari, the IDF posted to its blog something of a rap sheet on the longtime leader of Hamas’ Izz al-Din al-Qassam Brigades, including his alleged role in the kidnapping of young soldier Gilad Shalit.

Of course, the official Israeli obituary of Jabari leaves out a few rather meaningful items, like the fact that he was Israeli’s de facto partner and ally over the last several years. After Cast Lead, Israel and Hamas made a deal: the Islamic group would keep Gaza’s array of militant movements in check, and Israel would keep the aid trucks and the cash flowing. The man responsible for keeping the peace: Ahmed al-Jabari.

We recommend that no Hamas operatives, whether low level or senior leaders, show their faces above ground in the days ahead.

It worked for a while. But in recent weeks, the rockets began flying again, and Jerusalem became displeased with its “subcontractor,” as the ace Israel military observer Aluf Benn puts it. Jabari was openly warned to step it up, and then executed when he did not.

The message was simple and clear: You failed – you’re dead. Or, as Defense Minister Ehud Barak likes to say, “In the Middle East there is no second chance for the weak.”

As All Things D notes, it’s unclear whether or not the IDF’s tough talk violates the terms of service of the big social networks. Twitter users, for example, are not allowed “post direct, specific threats of violence against others.”

But you can expect some more Tweeted taunts in the days to come. Israel is now sending troops to its south, in preparation for a possible ground assault. The Israeli Navy is shelling targets from the sea. Meanwhile, Hamas is responding — both online and off. According to Ha’Aretz, 60 rockets were fired from Gaza on Wednesday at Israel’s southern towns and villages. Israel’s Iron Dome anti-missile batteries were able to intercept 17 of the rockets, which means 43 got through.

“Our blessed hands will reach your leaders and soldiers wherever they are,” Jabari’s former compatriots at al-Qassam Brigades tweeted at the IDF. “You Opened Hell Gates on Yourselves.” Caption img: Gawker