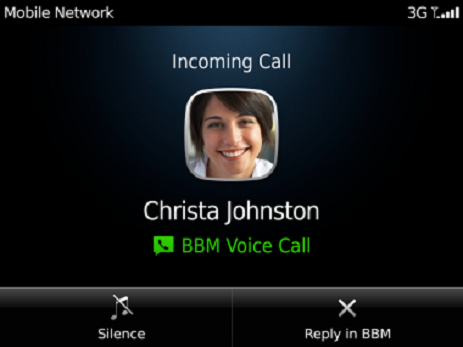 With roughly 60 million of Research In Motion’s 80 million subscribers using it, BlackBerry Messenger (BBM) is among the company’s more important assets. And as RIM gears up for the launch of BlackBerry 10, it is doing all that it can to ensure that BBM remains a key selling point of BB10.

To that end, RIM this week added a new feature to BBM: BBM Voice, which allows customers to make free voice calls to other BBM users around the world over Wi-Fi. It’s a nice enhancement to the service, particularly since it’s designed with a split-screen feature that allows users to talk and text or e-mail simultaneously.

“We’re expanding the capabilities of the service for deeper social engagement and even greater collaboration, beginning with voice functionality,” said T.A. McCann, VP of BBM at RIM. “BBM Voice … is for when you’re traveling and you want to call home without worrying about phone charges.”

Not exactly a new idea.

Once could argue that RIM is late to the game again here and only doing what Apple has already done with iMessage and FaceTime, Google with Gtalk and Microsoft with Skype. And that’s certainly true. BBM Voice is something RIM should have done long ago.

But that doesn’t make the fact that it’s rolling it out now any less important. BBM Voice is RIM’s effort to keep BBM popular in an era of increasingly advanced smartphone platforms and apps. And while it’s not a major advancement, it’s likely a good way of keeping current subscribers in the fold — particularly in emerging markets where SMS text messaging fees can be prohibitively expensive.

BBM Voice may not win RIM many new customers, but it may help it hold on to those it already has by giving them another reason not to defect to competing platforms. Link: http://allthingsd.com/20121115/blackberry-messenger-voice-its-about-time/