NewsRescue[David Stein]- Did Jason Russell, the overnight famous and infamous young man from Invisible Children, producer of the viral video on Uganda’s Joseph Kony, ‘Kony 2012,’ make a pact with the devil for fame?

In the new TMZ exclusive video above, Jason Russell, a founder of Invisible Children is seen stripped naked, running around the streets of San Diego slapping his hands on the ground in odd ritualistic manner, yelling out all types of expletives and strikingly pointing and calling out ‘SATAN… SATAN!’ ‘You are the DEVIL! You are the DEVIL!’ He can also be seen prancing around like a model on the runway; he can be noticed with a typical effeminate strut and making gestures in same fashion, sparking rumors of him being ‘gay’, and not the actual father of his child. Reportedly in this episode he also masturbated publicly.

His family have said he was not on drugs, so this excuse does not apply. What will make an apparently intellectual, normally functioning father go crazy in such a way and call the name of the devil?

Many are beginning to believe that he sold his soul to the devil for fame and wealth and broke down upon actualizing the pact. This type of behavior is surprisingly common in Hollywood, and Dave Chappelle who also experienced a similar trial but escaped from his by running to the motherland, Africa, had this to say of Celebrity meltdowns:

*To art student audience*  Just prepare to have your heart broken… you see him laughing *show host laughing* that evil laugh? Because he knows. … and everyone here .. laughing…. just get your Africa ticket ready because you have no idea. … Martin Lawrence is the guy that showed everybody you can make it from DC to Hollywood. I had a personal stake in his success, every time we did something it made me feel inspired and really good… and he was always real nice to me…. you know when we did Blue streak, we were promoting it and Martin had a stroke, it was bad, and afterwards when I spoke to him, asked if he was ok, he said- you know I had the best sleep I ever got my life. This is how tough he is.

So let me ask you, what is happening in Hollywood that what is happening in Hollywood that a guy that tough would be on the street, waving a gun screaming ‘they are trying to kill me’. What is going on? Why is Dave Chappelle going to Africa? Why is Mariah Carey make a 100 million dollars deal and take off her clothes on TRL? A weak person can not get to sit here and talk to you. Ain’t no weak people talking to you. So what is happening in in Hollywood? No body knows. the worst thing to call somebody  is crazy. It is dismissive. I don’t understand this person so they are crazy. Its BS$&t! These people are not crazy, they are strong people. Maybe the environment is a little sick. 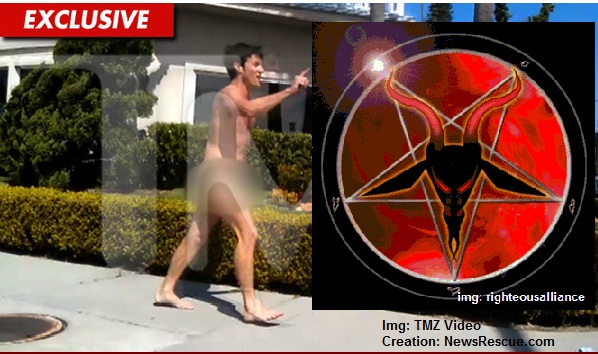 Jason Russell in 2006 first attempted the Kony 2012 take-down agenda. In the video here he can be seen with other members of Invisible Children, rationalizing how difficult it is to garner public attention. They resorted to ‘break-dancing’, the ‘electric slide’ and shooting spells at the crowd of youth in the video to get them involved. Obviously this did not work, as the video barely had 3000 views.

Now here is the funny scenario I have heard from more than one person- Jason was allegedly visited a while back, by a charismatic individual who assured him that if he made a certain pact, he will guarantee him a millions of views, global celebrity status and wealth more than his wildest dreams. Story has it that Jason bled to it, promising that if this was indeed possible, he will fulfill his part of the deal.

In March 2012, Jasons new video, ‘Kony 2012’, a video which fulfilled no other purpose than enabling US militarization of Central Africa, the worlds naturally most resourceful land, shot to unimaginable fame in a matter of hours. This video was by most opinions one of the least intellectual public videos in recent history, with no single reference to facts or figures. Joseph Kony, the target of the campaign is either dead or no better than dead: He has not been heard of for over 6 years now… well except last November when Obama sent 100 US troops to supposedly search for him, amidst strong local opposition.

Related: NewsRescue– The Real Crises in Uganda and Central Africa: Worse than the Holocaust- No, Not Kony 2012

The video was made of high Hollywood quality but other than this, it only had two information sources, one was some African boy, who accused Joseph Kony of killing his brother, and the other was Jason Russell’s son, questionably being exploited. However like a miracle, this same video shot to global popularity as celebrities like Oprah Winfrey, P Diddy, Rihanna, to mention a few, unusually and surprisingly immediately put their weight behind it.

All major mainstream media stations also ‘surprisingly’ went in full thrust supporting and offering this uninformative video free airtime and sponsorship. Even the US congress spoke of it and rushed to introduce a bill to the table in line with the video, to initiate military action in Africa. Guardian UK was updating so fast, at night in the UK, they had to sign over to their US correspondents to keep the hourly updates on Jason Russell’s KONY 2012 propaganda video. Same was happening with CNN.

So what happens? The story goes, that it was time for Jason Russell to fulfill his side of the bargain and be fully initiated into the devil club. Whether he completed the initiation or not is not known yet, but what is known and what all have seen is what happened to Jason Russell after his miraculous catapult to success; he ‘melted down’, as is common in Hollywood, he was not on drugs, a victim of blunt trauma or anything unusual. He stripped naked and called Satan, speaking to something around him that others did not see and was not captured on tape.

In the video here, famous celebrity figure, Bob Dylan describes his commitment to fulfilling his bargain for success, to as he calls it, ‘the chief commander…of this earth and the world we can’t see’.

I suggest that anyone else who wishes for a fantastic jump to fame, should be strong enough to go through the process, or be prepared to face the shame. Jason Russell promised to expose and make ‘Kony’ a household name, well it is, but Jason is the new ‘Kony’. Jason only ended up ‘exposing’ himself.