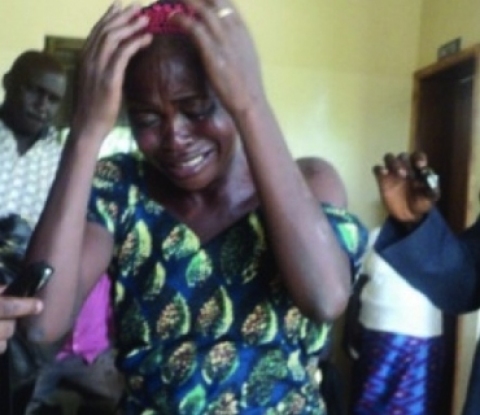 SaharaReporters– Some citizens in Kaduna State say they have lost faith in their governor, Mr. Patrick Yakowa and the security agencies in Southern Kaduna, following today’s incident in which unidentified gunmen killed seven members of the same family and set their bodies ablaze.

The suspects, alleged to be Fulani ranchers in Azansak village of Zonkwa area of Zaongo Kataf local government in the Southern part of Kaduna, attacked the family at about midnight, local time.

Kazzah Peter, one of the participants in the anti-soldiers protest that followed in the Zonkwa area, told SaharaReporters via telephone that the communities are demanding the removal of soldiers in Zangon Kataf local government.

He explained that the presence of the soldiers has no significance, describing them as “just a stumbling block against our self defence, [and also] not defending us nor stopping attacks against us.”

He said: “I am telling you that we have lost faith in Governor Yakowa and the military check points in all our communities. They are all signs of no hope and we will no longer trust in them. No more assurances of peace and law abiding, any attack on us we will no longer listen to so called government’s weak strategy of calming us down.”

Turning to the State governor, he said, “Every day you hear Yakowa saying they are committed and spending millions of money in security. Where is the security? Where is the evidence that public funds are being expended on security? What is relevance of the peace parleys every day? We are opting out, let him know that we have lost faith and hope in his government, they cannot secure us, let them pack the soldiers and let us handle our destinies.

Imagine, a governor that cannot come and see for himself a community that six people of same family were gunned down and burnt. What emergency can hold a human being from such calamity?

“Soldiers are not far from the scene and they turn a blind eye, when the Fulani finished shooting and burnt our people, they now appeared and started harassing us from protesting their inefficiency. We are fed up with anything of government’s promise because we are carrying our lives on our heads. Something fundamental is wrong and we have told ourselves the reality, that this government cannot protect us. Let soldiers just pack.”
Peter recalled that the situation was the same during the violence that accompanied the presidential election in 2011.

“The violence [started] here with the Hausa-Fulani first killing over ten persons and burning our houses. But the government set up a Kangaroo Commission that ended up being political and accused us of starting the violence, and backing up lies that we possessed sophisticated guns and killed them via propaganda. All the people they indicted are mostly old people and cannot even feed let alone buy weapons.”

Dominic Yahya, the chairman of the local government, did not answer his phone when SaharaReporters called him from New York.

Kaduna State will legalise vigilante groups in order to provide adequate security for its residents, the state government said on Thursday.

The government said the legalisation of the vigilante groups in the state has become imperative as it will assist in securing the lives and property of people at the grassroots.

The Commissioner for Justice in the state, Kish Adamu, represented by his Permanent Secretary, Mohammed Aminu, said this to newsmen after the State Executive Council meeting in Kaduna.

He said the community members will share in the cost of the operations of the vigilante groups.

He said the financial responsibility of the group would be shared between the community, state and local governments.

“It is expected that the burden of shouldering it would be primarily handled at the grassroots.

“The community would continue to bear the expenses, but the local governments will also play a major role in the financing and operation, and wherever possible, the state would also come in to assist,’’ the commissioner said.

Mr. Adamu said the public, and corporate bodies, are also expected to assist in sustaining the operations of the vigilante service to ensure peace in the state.

“We have to be responsible. We shouldn’t expect the security outfits to be able to do everything in terms of policing the state,” he said.

He said the council had approved a draft bill on the establishment of vigilante service, which would be submitted to the State House of Assembly for passage into law.

“Vigilante groups are community- based, they emerge and function within their locality with the view to assisting the security agencies in maintaining law and order, ensuring that miscreants don’t pose a lot of threat to the people,” he said.

Kaduna has been faced with various kinds of violence, from that by the dreaded Boko Haram, to communal and ethnic clashes, and also attack by armed robbers.

Mr. Adamu called on the people to assist security agencies to address security challenges, as it had affected developments in the state and the nation at large.