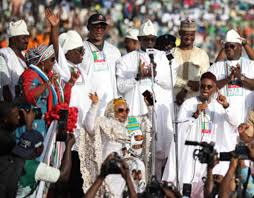 Nigerians have taken to the various social media platforms to express their opinion after the Governor of Kaduna, Nasir El-Rufai, begged voters in Kogi to support the reelection of Governor Yahaya Bello in next Saturday’s governorship polls.

Mr El-Rufai, who heads APC campaign council for Kogi, went down on his knees before the electorate asking them to forgive Governor Bello ”for all the wrongs he might have done to them during his first tenure and ensure his re-election.”

While this was ongoing, as shown in the video, Mr Bello was clapping in the background.

Since then, Nigerians have been airing their views, mostly on Twitter.

Some of the commentators expressed their discontentment at the APC candidate’s style of governance in the state.

Some of the comments are listed below:

Thank you Elrufai, but next time, make sure you’re kneeling down to beg him to pay salaries and not for the suffering people of the state to reinforce nonsense.

Thank you.” – Henry Shield (@henryshield), wrote on his wall.

Another twitter user, Boda Joe, compared the four years rule of Mr Bello to ”100 days in office of a PDP governor in Oyo State”.

“There’s a saying that *a fool @ 40 is a fool forever* Yahaya Bello is 44 and they are begging for his forgiveness for not paying over 30mnts salary nor a single project cos he’s young and can make mistakes.

“Even Seyi Makinde in 100days has done more than Yahaya Bello in 4yrs.” – @_mrjoe commented.

“Dear Kogi people. Don’t miss the only chance you have to get your salaries paid. Aisha Buhari does not cook soup in her house with promises. Send a message to Yahaya Bello. Tell him unless all your arrears are in your account before voting commences, you are voting PDP,” he said.

“[email protected] says the public apology and kneeling by the Chairman of the @OfficialAPCNg Kogi state campaign council, Kaduna state Governor @elrufai, confirms that even the APC agrees that Governor Yahaya Bello does not merit a second term.”