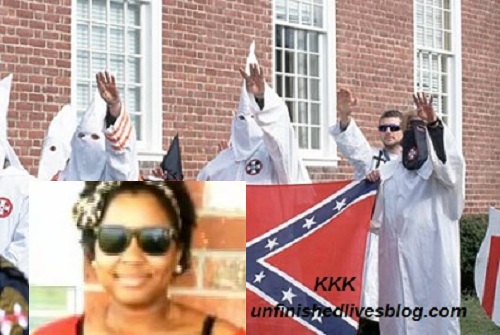 Ku Klux Klan has set an Afro-American woman on fire in yet another act of racism.

The 20-year-old woman has received third degree burns after being set on fire by alleged KKK attackers in a park in the state of Louisiana.

The incident occurred on Sunday night in Civitan Park in the city of Winnsboro as three men attacked Sharmeka Moffitt while she was exercising.

The victim said the men in white hoodies poured flammable liquid on her and set her on fire. She managed, however, to extinguish the fire using water from a tap before police arrived at the scene.

Moffitt was found with third degree burns on her arms and additional burns down her chest and legs to the first degree. She is reportedly in critical condition at LSU Medical Center in Shreveport, Louisiana.

The FBI is investigating the attack as an alleged hate crime.

The hood of her car was spray painted with the letters KKK, the abbreviation for Ku Klux Klan, a far-right extremist organization in the US advocating white supremacy, white nationalism and the end of immigration.

During the US civil rights movements in the 1950s and 1960s, the KKK violently opposed the movement and desegregation by bombing African American schools and churches and killing African-Americans and civil rights activists. –PressTV; Victims photo courtesy huffingtonpost