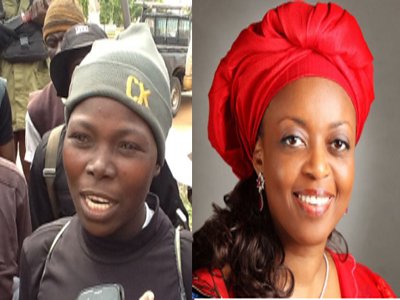 The one is a dame of power, rides a private jet, looks silky and satiny, has bold and imperious eyes, defies the National Assembly, presides over the nation’s pot, speaks in public with bored and superior look, craves accolades and pooh-poohs the critic, rose steeply from a mocked minister to an Amazon of influence. Some despise her, some others fear her, some others adore her, but most admire her without liking her. Recently, she became a president and popped champagne.

The other has rural air. She is not a dame but she wields a Dane gun. She hunts rabbits and antelopes. She is charming without the effluvia of glamour. She cannot speak good English. She knows no fear, is indifferent to her influence, owns neither car nor jet, craves no air-conditioners or the glitz of accolades. She probably does not pop champagne, which might be a bibulous appetite and impious. But she pops guns. Recently, she – and her peers – shot Boko Haram out of town.

The one is our Oil Minister, Diezani Alison-Madueke, who recently gained world attention as the first female President of the Organisation of Petroleum Exporting Countries known as OPEC. The other gives her name simply as Ladi, and she was one of the few female hunters who wove a heroic skein when they shot Boko Haram out of some northeastern towns. The routed Islamists had turned the places, including Mubi, into redoubts.

Both are women, both are doing significant things, but one is heroic and the other is living a life of dubious glamour.

Few Nigerians are paying great attention to the stories of the young women like Ladi who are fighting for the survival of this country. Rather the front-page stories are bedecking the exploits of an oil minister who becomes a president and the first female one at that. She deserves the post not from personal distinction but from the accidental distinction that Nigeria is a major oil-producing country. Never mind that her ways are turning Nigeria gradually into a beggar nation and straightened agonies.

But Ladi bests Allison-Madueke. Ladi has put her life on the line. In a lucid report of the New Telegraph of Sunday November 23 by correspondent Ibrahim Abdul, the young woman of about 20 years of age defies the insurgents. She says: “Boko Haram’s days are numbered… we are ready to fight them.”

She flashes her Dane gun, unfazed by the tanks and modernity of Boko Haram’s armoury. “We know they are using sophisticated weapons but that will not deter us from facing them squarely,” she intoned. She dares the insurgents unlike our fleeing soldiers. She is evidence of the lines of poet and novelist Alyxandra Harvey who wrote, “If we act like a prey, they’ll act like predators.” She knows she is no prey.

While Ladi does exploits, some young women are doing harm. A picture of a female bomber ran viral on the Internet recently. She destroyed herself and others in a recent explosion in Niger State. Her face was beatific, but beneath the quiet repose dangled raw and charred remains of her full body. She believed, but killed. Ladi believes in the integrity of Nigeria. She flays the Federal Government for not doing enough to mow down the goons of faith.

Ladi, like other volunteers like the Civilian JTF, has mobilised the young against the spirit of surrender in Abuja. The civilian JTF exposed female partisans of Boko Haram who disguised as regular women in purdah.

But Madueke rides higher praise from an undiscerning nation. She is presiding over the best and worst times in Nigerian history. On her watch, oil price soared to over $110 per barrel. But our OPEC princess has reigned over an opaque accounting. Though awash in money, all economic indices turned upside down. Unemployment has jumped, and this is creating a ticking youth time bomb.  A central bank boss charged that about $50 billion was missing. The outcry matched the outrage, but not the response from government. Her colleague, the finance minister, said it was far less – about $10 billion. For over six months since the scandal broke, no clear public accounting for the about $10 billion the government admits is missing.

The nation’s reserve has dropped from over $68 billion to about $37 billion on her watch as minister. The Federal Government cannot pay the states their share of revenue each month, driving them to stop many government projects and default on financial commitments, including to their civil servants. The finance minister says the nation is not broke, but the nation keeps borrowing. Now, the price of oil has fallen steeply to less than $80 dollars per barrel. The naira, which stood quaveringly at about N140 per dollar a few years ago, is about N180 today. Madueke claims that theft has depleted our oil but she and her government cannot hold to account the militants they paid billions to guard the oil pipelines.

The NNPC that supervises oil in the country has acted above the law, thanks to her. When the legislators summon her, she recoils with patrician disdain and does not show up. She even shunned the House of Representatives when she was summoned to answer questions on why she spent about N2 billion on private jet travels. Nigerians do not know how much we earn from oil, and when they give us a figure, we do the math and it does not add up to what we get in real terms. When the price of oil was over $110 and the budget benchmark was $78, we still could not pay our bills. Madueke has not accounted why NNPC cannot pay in spite of all we sell.

For all these, she becomes president of OPEC, and we congratulate her for what? For ruining our oil industry and economy? She and her Finance Minister Ngozi Okonjo Iweala, who covers for her and never holds her to account as the bread winner.

We should celebrate Ladi instead. She is a warrior and a patriot, in the same tradition of female warriors in African history like Aminatu of Zazzau, who conquered territories. Or Oya, Sango’s consort, whose eminence struck fear to the extent that legend said she created hurricanes and tornadoes. Have we not heard of Yaa Asentawaa who fought the war of the golden stool? In ancient Dahomey Kingdom, female warriors known as Ahosi or king’s wives made mincemeat of its neighbours. There are great women and there are femme fatales. The great women cannot be ignored. We know of the imperious infamy of Jezebel, or the manipulative cruelties of Cleopatra. But who could beat the savage subtleties Livia’s genius. She was the wife of Emperor Augustus and, from the shadows, dictated the lives and deaths, the rising and falling of many in Rome.  Few writers have documented Livia’s tyrannies like novelist Robert Graves in his book, I Claudius.

But of course we had the moral beacons of Margaret Ekpo, Funmilayo Ransome-Kuti, Joan of Arc, The Egyptian Nefertiti and a host of others.

Ladi and her fellow hunters may not rise to the high horses of these mythical women, but they can aspire, even if they are not literate enough to know about them. Oya did not go school.

The likes of Ladi beat the militants with a hunter’s arms and heart. Her style is a recipe for Nigeria’s success: No frills, no corruption, fiery patriotism, faith in fellow hunters, heroics without seeking monetary rewards. She was not a beneficiary of the oil money that fueled the one trillion-Naira-a-year defence budget in the past three years. Yet we cannot give our soldiers sophisticated firepower to tame the insurgents. But Ladi wins with Dane guns. Her triumphal soldiery mocks our fabled trillions and the false swagger of our first female OPEC president.