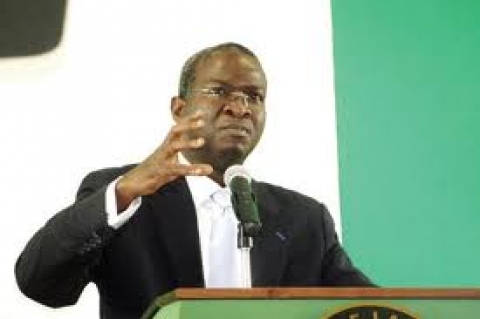 What Fashola and Obanikoro are trying to prove can only work to the detriment of the good people of Lagos State. This writer has to disclose his bias against Obanikoro up front. He gave the Yar’Adua Administration an excuse, not the reason, to ditch Bode Augusto for the position of Finance Minister. Lagos lost Finance Administration only to gain Ambassador to Ghana.

In this case Obanikoro thinks he has reason to oppose Fashola about sand filling Ilubirin for building a housing estate. Though, he is not the Minister of Housing like another Lagosian, Wahab Docemu that asserted Federal Authority in Lagos, during the Shagari Administration. It seems this Federal power goes into their heads against their states of origin. Docemu bragged then that he could declare any land in Lagos as a Federal territory.

Well, Fashola is not a saint either. He handed Tinubu the best of Lagos land. More importantly, Obanikoro raised a good point. Out of all the dry land that is flooded in every raining season, Fashola could not find any from Eti Osa to Ikokomaiko for urban renewal. Fashola did a good job in Isale Eko area when he called owners together reallocated some, financed and rebuilt their slum into modern apartments giving them the option to move back or rent. Omo-oko!

This is not the place to discuss Eko Atlantic, but reclaiming areas that would disturb adjacent land resulting in new flooding is worse than addressing areas already claimed as dry land. Of course landfilling is more capital intensive and calls for engineering capabilities that have to be sourced to foreign contractors leaving our graduates pandering to foreigners as we see today in Eko Atlantic. The cost itself as Obanikoro pointed out would be out of reach to our neighbours.

Jakande has laid a foundation for every Governor of Lagos State. He built schools and housing within, which Lagosians can afford. Apart from that, government should not build houses that working and medium income people cannot afford. The best we can expect from government if they are worried about degeneration is to build mix income housings where people of different classes can live in peace and harmony. If anyone messes up, he loses that privilege.

Unfortunately, decay of beautiful housing, schools and parks is not the handiwork of the poor or the uninformed alone, but lack of maintenance mentality. Watch how Surulere is going down or what happened to FESTAC. Anyone that knew Ikoyi and Victoria Island, woke up, would go back to sleep again. Fashola has certainly made a difference in the upkeeps of the new places he built. We must give him his dues. It does not negate the deep slums that still need attention.

We have to be careful about creating government sanctioned blogged drainage in the name of new housing. If Fashola did his homework and found Ilubirin suitable, there is no reason he and Obanikoro cannot work together to bring Federal presence to Lagos. The benefit of having a local representative in the Federal is to enhance local interest. But Lagosians and others, we must admit think they have to display Federal might to spite the home Governor.

Some of you may remember Joseph Wayas as Senate President with all the Federal accolade and guards when on a visit to his State. Another Federal power Sen. Christy Anyanwu tried it with Owelle Okorocha’s motorcade. We have to understand that working for one level of government or the other does not mean we should disrespect each other. We are all serving the same people without whom we are powerless. Our power comes from the people.

Another case in point was one of our respectable chiefs in Lagos. Before he built his house, he got permit some 30 to 40 years ago and it took him about 20 years to build. Then, drainage was albatross anyone would avoid. But over the years, drainage has be channeled and rechanneled by our engineers and in the process some permits were issued while old permits fell under their reconstruction. Moreover, after so many years, some influenced their ways out of drainage.

Therefore, some 30 years later the honorable Chief was told his house was blocking drainage! Drainage is now a fact as well as a political tool. This is what we witness in Lagos. It is not clear whether Obanikoro gave the reason for drainage at Ilubirin as afterthought but it makes sense. The people of Lagos have enough political fights within the families. These are grown informed men that should be looking out for Lagos instead of – man pass man position pass power!

We do not know if there is anyone left that can call these politicians to order since it was reported that one of the Lagos usurpers told the Oba of Lagos to mind his business since he, made him. Can you imagine a non-native of the soil in any village in Nigeria putting the Emir, Obi or Oba of a prominent town in his place? Oh well, nobody has Lagos. It belongs to no one.

However like any village, the real Omo-Onile Lagosians have to wonder and ask: if politicians in Lagos do not listen to them, who in Lagos do they listen to? Many of their cousins and relatives lament that they have no influence over a state they fought so hard to create and build while accommodating everyone. States have developed the fear of sharing land or resources. Even worse, it has spread like wild fire where people have become less tolerant of other Nigerians.

Nonetheless, Obanikoro has to be careful and learn from Wahab Docemu on what belongs to Lagos and what belongs to Nigeria. Power either locally or nationally is transient dependency like drug, which can cloud the legacy of man. Our reputation lives forever after we are gone. As for those that care very little about their legacy, Lagos is after all a very small village. They know one another and which house Agbole each comes from.