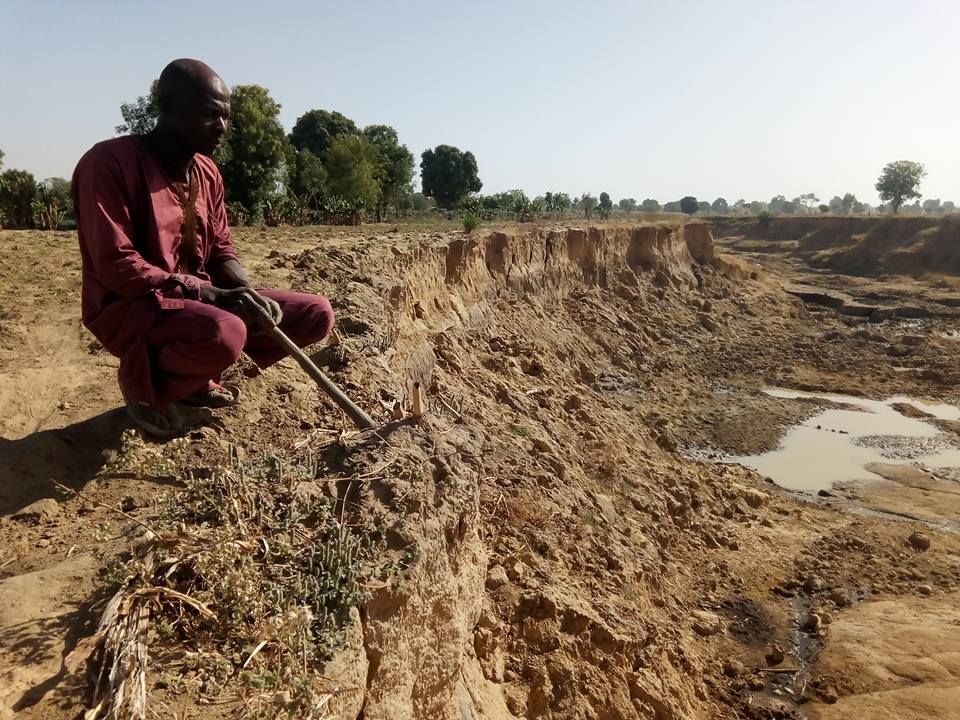 According to the local  farmers in Kaduna, Zaria and those behind Kangimi Dam  that were visited  during  a tour by African climate reporters experts, they explained that every year large hectares  of their agricultural land do usually wash away by river bank Erosion and desertification problems.

Mallam Umaru Magaji is one of the farmer at Sayin Lemo alone zaria kaduna expressed road who  told the team that visited them in their farmland that ,most of their land has gone due to this problems, and according to him, the problem is increasing day –by-day,destroying their agricultural land  and making them losing hope in farming their crops in the area.

Magaji pointed that, the speed of water that passed alone their farmland always wash away half of what they usually planted during the raining season.

“As you can see half of our farmland has gone already and the problem is getting worse day by day,we don’t have any idea on how to stop this problem and that is why we are calling on all necessary organization to come to our rescue.” 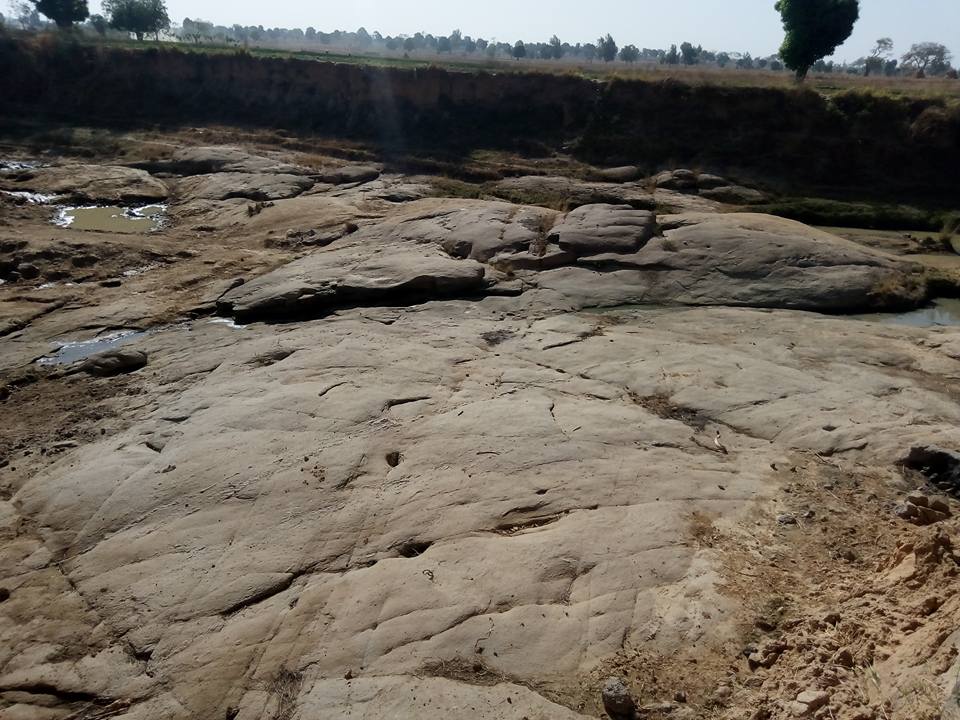 He says,this is not how our farms looks like before, because we don’t have this problems ,but due to lack of support and advices from expert, our agricultural land is about going, and we don’t know what to do.

“large hectares of agricultural land in this area is going simply because of desertification,and it keep on expanding there by making us losing hope in the place of future farming in the area.”

“River Bank  erosion is perhaps the most common problem facing many streams in today’s waterway systems.  Streams are very dynamic ecosystems that move, grow and change naturally or when human activities impact them.”

Another farmer Malam sani musa residing at one of the 6 villages behind Kangimi Dam kaduna,also lamented how their farms in the area is facing a serious threat ,as the water that passes always wash away half of the crops they planted and the soil.

Musa expressed sadness over the increase lost of his farm land due to these problems that is disturbing them.

“We don’t know what to plant alone the river to stop losing our farmland,as you can see ,the seizes annually do expands, and to us this is a set back, because we are losing agricultural land.”

Most farm owners alone river banks are not happy with the current situation that they find them serves as their agricultural land  is in a critical situation without finding any solution to halt it.

In a research conducted by African climate reporters, it says that  In Africa  every year, large hectares  of agricultural land, do usually follow the River and  go, making the owner losing the farmland and the crops  at the same time, while pointing at Flooding of bank soils followed by rapid drops in flow as one of the responsible factors, and  the problems  Poor Soil Drainage.

African Climate reporters has visited some stream and River in some state of Northern Nigeria to see the impact of this problems to agricultural land ,and also to see how to deliberate on the issues with the farmers that are farming alone the river bank every year. 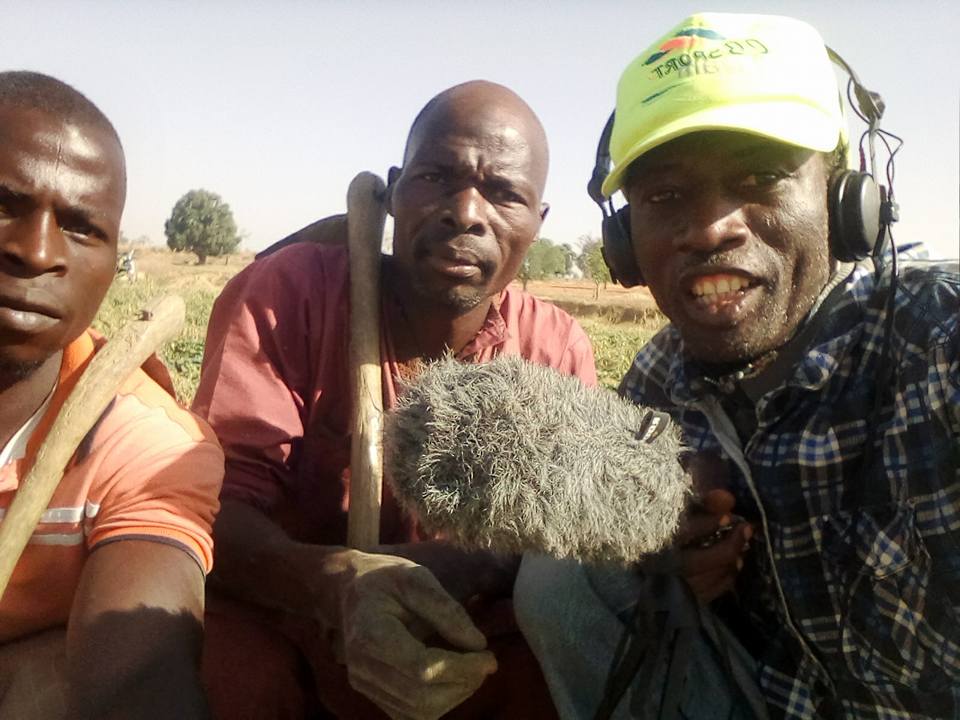 Apart from kaduna, Kano, Jigawa, Sokoto, Kebbi, Zamfara and other states of Northern Nigeria, desertification problem is on the increase ,hence the need to sensitize the local farmers various method of Trees planting and other plant to protect their farmland against disappearing due to river bank erosion and desertification problems that is contributing in putting their farmland at risk of disappearance.

Indeed ,African climate reporters told the local farmers that, River bank erosion occurs both naturally and through human impact, as Rivers and streams are dynamic systems as they are constantly changing.

Impacts of river bank erosion are multifarious: social, economic, health, education and sometimes political, The first and foremost impact is social, i.e., homelessness due to land erosion which compels people to migrate, after forced migration they suffer from economic crisis, namely loss of occupation and loss of property, and they are at the risk of poverty and sometimes involvement in criminal activities.

Comrade Nurudden Bello ,the regional director of African climate reporters  during the visit urged African farmers to find means  of planting more trees in their farm land, so as to protect their farm land against all forms of threat.

While calling on more experts in the country to always visit such farmers and other places that is in a critical situation like these to sensitize the peoples on how to contribute by helping protecting their land before getting into worse situation.