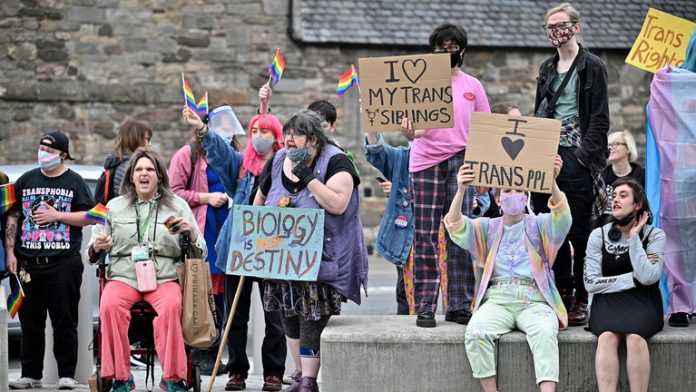 The UK government has taken an unprecedented step to intervene in Scottish legislation, using its veto powers for the first time to prevent the implementation of a contentious new law that would make it easier for Scots to legally change their gender.

Scottish Secretary Alister Jack announced on Monday that the British government is using Section 35 of the Scotland Act 1998 to prevent the passage of the gender-identification bill passed by Scotland’s parliament last month. The government of Prime Minister Rishi Sunak has claimed that separate Scottish legislation would create “significant complications” in enforcing protections provided by the UK’s Equality Act.

The overlapping laws would enable more “fraudulent or bad faith applications,” Jack wrote to Scottish First Minister Nicola Sturgeon. “Transgender people who are changing their legal sex deserve our respect, support, and understanding,” he said. “My decision today concerns the consequences of the legislation for the operation of Great Britain-wide equalities protections and other reserved matters.”

According to the BBC, the Scottish government is expected to challenge the ruling, possibly through a judicial review, arguing that the Scottish bill would not affect the operation of the UK Equality Act.

Sturgeon described London’s decision as “political” and a “full frontal attack” on Scotland’s parliament. Sunak’s government is “using trans people, who are already one of our society’s most vulnerable and stigmatized groups, as a political weapon,” she told reporters on Monday. The “outrageous” ruling, according to Scottish Social Justice Secretary Shona Robinson, marks a “dark day for trans rights and a dark day for democracy in the UK.”

Given public opposition to the legislation, blocking the bill could help Sunak’s Conservative Party win more votes in Scotland. According to a December poll, roughly two-thirds of Scotts opposed the reforms.

The legislation would allow Scottish residents to legally change their gender on official documents after only three months of living as their preferred gender. There would be no need for a psychiatric diagnosis or other form of verification, and the minimum age for receiving a gender recognition certificate would be reduced from 18 to 16. Applicants would also be given a three-month “reflection period” after approval in case they decide to return to their former gender.