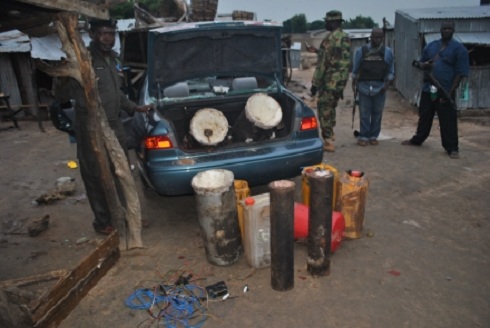 The Joint Task Force on Operation Restore Order said, on Tuesday, that it intercepted the deadliest bomb-laden vehicle in Maiduguri.

The JTF spokesman, Lt. Col. Sagir Musa, said that the arrest took place on Monday at about 6 p.m.
“The JTF, based on information obtained from an arrested Boko Haram terrorist and moles in the Boko Haram Camp, intercepted a Toyota Camry 2001 model car  heavily loaded with Improvised Explosive Device,” Col. Musa said.
The car has registration number Borno AA 867 MAF and was intercepted in Tudu quarters, Maduganari area of Maiduguri.

“This is the deadliest bomb-laden vehicle to be arrested by the JTF in Maiduguri,” Col Musa said. “Had the suicide bomber gotten to its target, fatalities would have been very high.”

Col. Musa  said that the vehicle was heading to an “unknown destination” when it was intercepted, adding that the sponsors of the suicide bomber, led by a high profile Terrorist Commander were under surveillance and would soon be arrested by the JTF.
The recorded bomb materials and incendiaries recovered in the car included four DAF gas oil cylinders, three constructed IED, 18 x 9 volts batteries with 2 switches and  four x 25-litre jerricans with incendiary materials earmarked for suicide bombing.