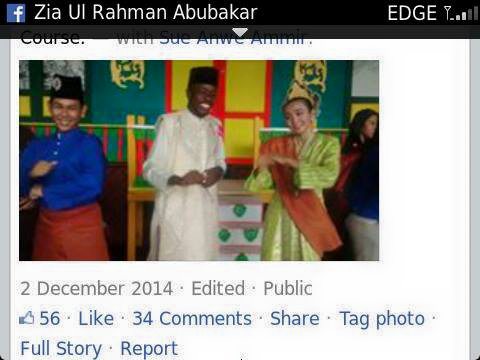 The picture of the man who purportedly started the criticism of President-elect Muhammadu Buhari for shaking a female which went viral on social media has been pictured dancing with a girl in Malaysia.

Zia Ul Rahman Abubakar criticised Buhari for shaking the wife of Edo State governor, Adam Oshiomhole during his wedding in Edo State, a development that sparked controversy on the social media.

Unknown to him, a picture he posted himself in December 2014, where he was dancing with a female in Malaysia was lying somewhere waiting to be dogged up.

However, Zia remained unrepentant. He posted the following on his facebook wall.

“They Have Started Digging The Pictures I Took During My University and NYSC Days, Trying To Find My Faults. Take A Look, Many Un-Islamic Pictures Are There. Upload Them To Your Page and Make Your Condemnations Too. That Doesn’t Justifies What Buhari Did. lol… Joblessness!”

“…Reading all the extremely childish and petty crap written about me with reference to my harmless post on Buhari’s handshake, one comes to the easy conclusion that you stand a great personal danger if you don’t join in the present day Buharism going on in some circles” – AS