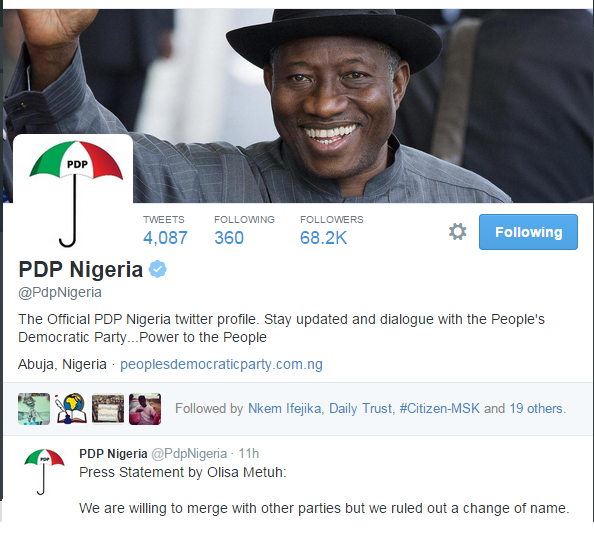 There is madness in PDP.

@PDPNigeria, the official handle of PDP party today tweeted a bunch of tweets accepting responsibility for Nigeria’s woes. See the tweets and comments.

Every opinion is important because it represents how some Nigerians are feeling about our party. Lesson time for us as a party. 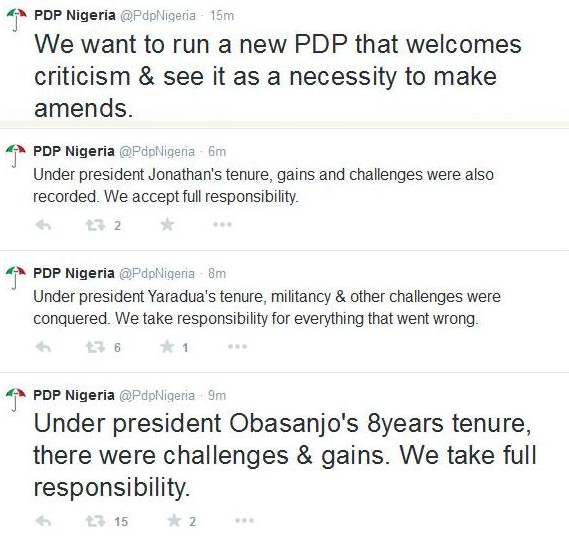 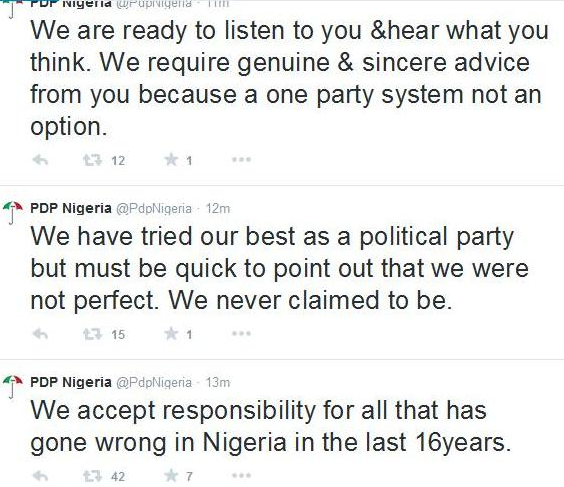 Here’s what happened next as relayed by PremiumTimes’ Michael Abimboye:

There was controversy at the media office of Nigeria’s ruling Peoples Democratic Party, PDP, on Sunday after its verified twitter handle stated in a series of tweets that the party was responsible for Nigeria’s state of affairs.

Party officials scrambled to disclaim the tweets as the party’s spokesperson, Olisa Metuh, told PREMIUM TIMES he would issue a formal denial of the tweets early on Monday. There were, however, no indications the twitter handle was hacked even as another official in the media office said the party had not officially twitted for “the past three days.”

In the Sunday tweets, the PDP twitter handle, @PDPnigeria, stated that the party was ready to listen to advice from Nigerians going forward.

“We accept responsibility for all that has gone wrong & bad in the last 16years & we give you Nigerians the credit for successes recorded,” the PDP tweeted.

“We want to run a new PDP that welcomes criticism & see it as a necessity to make amends. We have tried our best as a political party but must be quick to point out that we were not perfect. We never claimed to be,” it added.

The party, which lost the presidential election and majority seats in both chambers of the National Assembly for the first time since 1999, stated however admitted that Nigeria made some gains as well as faced challenges under the different governments formed by the party.

The party also urged Nigerians to help it become a better opposition by offering genuine and sincere advice.

“We are ready to listen to you &hear what you think. We require genuine & sincere advice from you because a one party system not an option”.

President Goodluck Jonathan of the PDP is set to handover to Muhammadu Buhari of the All Progressives Congress, APC, on May 29. The APC is also expected to produce the leadership of the National Assembly after winning absolute majority seats, as well as produce majority of Nigeria’s 36 state governors after May 29.- PT