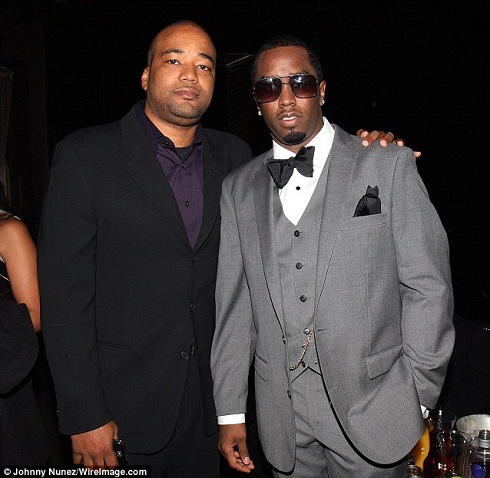 Hip-hop bigwig Chris Lighty died after he shot himself during an argument with his ex-wife inside his Bronx apartment, it’s being reported.

Lighty, 44 – a longstanding manager of 50 Cent, Diddy, Ja Rule and Carey – shot himself in the head after an argument with his former wife at about 11.30 am today. Tragic death: Chris Lighty with ex-wife Veronica, at Kanye West’s 30th birthday five years ago; he shot himself after an argument between the two

The New York Daily News confirmed this with police sources.

Law enforcement sources added that Lighty – who divorced his wife last year – may have been dealing with financial struggles, including owing about $5 million to the IRS.

Lighty, founder of Violator Management, merged with another talent company to form Primary Violator around the time of his divorce. Grieving: Fans and friends of the mogul gathered in the street where he was found dead Support: Lighty’s friends hug one another as medical examiners work at the scene

Russell Simmons wrote on Twitter: ‘RIP Chris Lighty. Today, we lost a hip-hop hero and one of its greatest architects.’ Justin Bieber’s manager Scooter Braun wrote: ‘hard to believe it is true but RIP to my friend Chris Lighty. gone too soon.’

Lighty was a leading figure in the music world from 1988 when he joined Russell Simmons and now-Warner chief Lyor Cohen at Rush Management. Famous friends: Tributes poured in on Twitter for the hip-hop bigwig

He said in a statement: ‘I am deeply saddened by the loss of a hip-hop hero.

‘Chris Lighty has been a dear friend of mine since he was a kid. Was a brilliant partner in business and I was so proud of all that he had accomplished.

‘He is an amazing example of how a passionate kid from the street can go to the most even-keeled, smart, thoughtful manager in the business and a generous philanthropist. He was loved by everyone who knew him, including me. He will be missed greatly by all of us.’

Page Six reported in November 2011 that he was hit hard by financial issues and divorce from his wife of seven years Veronica.

An NYPD spokesman told Page Six: ‘At 11.33 hours police responded to a person shot in the rear of 670 W 232nd Street. When we arrived we found a male, 44, with a gunshot wound to his head.

A firearm was recovered nearby. He was declared dead at the scene. It is being investigated as a possible suicide.’