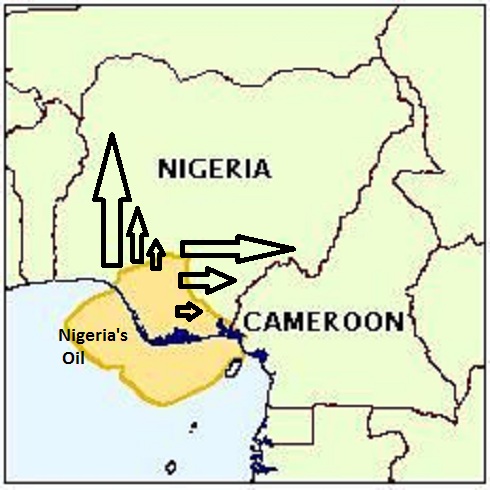 NewsRescue– The time has come and the need arisen, that this topic must be clearly written and expressed, once and for all.

Yes, the Niger Delta and all other southern states of Nigeria where oil wells are found, do not own a single of those oil wells. Oil wells and on shore and off shore oil are the property of sovereign Nigeria.

Those who keep ignorantly proclaiming that they own Nigeria’s oil are lucky that the nation does not apply its treason laws as should, because their statements are treasonable.

Reading a highly embarrassing outburst by the wife of Nigeria’s notorious terrorist, Dokubo Asari, and her claiming that Nigeria’s oil was her property, finally prompted the need to correct the many, literate and illiterate Nigerians who just do not understand that Nigeria owns what Nigeria has.

So let me explain this clearly and carefully in the simplest terms possible:

There is no minimal distance to an oil well known to proffer ownership. Or does anyone know this distance? How close your fathers house must be to an oil well to claim it?

At best, one can say the house should be right on top of an oil well for you to claim it. But this would only apply if your father utilized the resource from the well before Nigeria became one. Which is not so for any wells in Nigeria to my knowledge.

According to the laws of Nigeria and indeed all developed countries. You do not even own what is below your property, nor own several levels above your house. To build your house higher, you must apply for a permit and lease the air space above your property from the government.

So back to the measurement issue. Not by feet and not by miles, there is no known proximity to oil wells and off shore oil that makes a person who lives in the area own this oil as long as Nigeria is a federation.

The states were simply demarcated as needed for proper governing and not for distribution of national wealth and resource. Tomorrow, a president can likewise dissolve all states and then who owns the oil?

Perhaps people who live in the Niger Delta assume that because their property is within few miles to oil, it gives them ownership. So at what exact distance does ownership cease? Benin state? Niger state? Or Sokoto state?

Likewise, if your village does not have oil, do you realize that your stake to claim of oil wells is as vague as those in further off different states?

The simple reason why Nigerian government rightly placates and provides extra oil revenue income for the Niger Delta is not because they own Nigeria’s on shore and off shore oil, but to aid them due to the natural disaster Nigerian exploration of oil causes to their land.

Let me repeat this. If and unless/until there is a disintegration of Nigeria, Nigeria owns all natural resource north and south. The only reason why the Nigerian government gives additional income to Niger Delta states is not because they are the closest to the oil wells and off shore oil, but because their land is polluted and their environment destroyed due to the hazards and carelessness in oil exploration, and for this reason alone, the government compensates them as obtains all over the world.

In no nation in the world do we have such portrayal of ignorance, with the people where any resource is discovered claiming they own that national resource. This backwardness, this laziness and lack of nationalism and treason is only exhibited in Nigeria of all the nations in the world.

So perhaps we can accept that if your father was kicked off his land without any compensation, then you own a well, and only that well beneath your fathers land, not even the next well beside it in the village.

The problem with Nigeria is laziness. I once lived in Bayelsa state in the Niger Delta. This area is so riverine, but surprisingly at the time fish was double the price in more northern states.

I asked a fried fish vendor why fish was expensive. She responded, “We do not know how to fish, it is the Hausa that fish for us and they sell it to us at this price”. I was stunned. These people are called ‘water-children’, when they are born, they are tossed in the water and those who can not swim are allegedly left to drown as not true offspring. And yet they do not know how to fish, it is Hausa’s from the desert that are their fishermen?

But this is the story of Nigeria(non Igbo Nigeria). Laziness and total reliance on the government. When it rained, large fish swam into my house in Bayelsa. This is how abundant fish were, yet their fish sells at twice the national price.

And what did the youth all do? They walked around dressed up cool, in American clothes, planning and plotting how to get money from the government for ‘their oil’.

Little was I surprised soon after when MEND terror kicked off from those lazy youth in the Bayelsa region.

All ethnic minorities and Southern Nigeria has ‘Nigeria’ (one Nigeria) to thank for the peace and opportunity they enjoy. The current president, Goodluck Jonathan would never have been a leader in any of the pieces of southern nations, unless really small. If Nigeria some day disintegrates, the disintegration war will be the mildest of wars the south will experience, as that region has been predicted to get torn in dastardly wars for several centuries, while the lazy barons of the various southern ethnicities, fight each other for ‘my oil’.