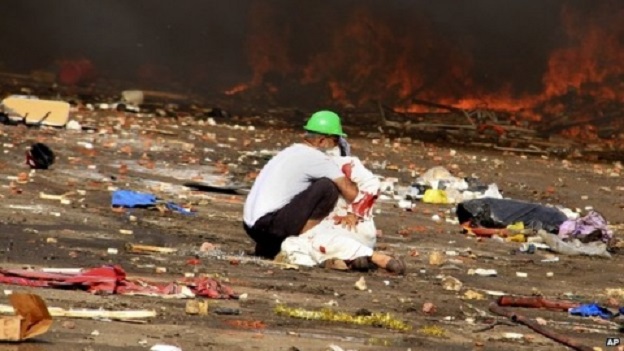 More than 2,000 have died when security forces stormed protest camps in Cairo, the Muslim Brotherhood, which was behind the protests, claims.

Egypt has declared a month-long state of emergency after scores of people were killed when security forces stormed protest camps in Cairo.

The camps had been occupied by supporters of former president Mohammed Morsi, who was deposed in early July.

State media say the security forces are now in control of the two main camps.

The state of emergency is scheduled to last for a month. It imposes a curfew in Cairo and several other provinces between 19:00 local time (17:00 GMT) and 06:00.

The measure was taken because the “security and order of the nation face danger due to deliberate sabotage, and attacks on public and private buildings and the loss of life by extremist groups,” the presidency said in a statement. source: http://www.novinite.com/view_news.php?id=152849 ; image: BBC