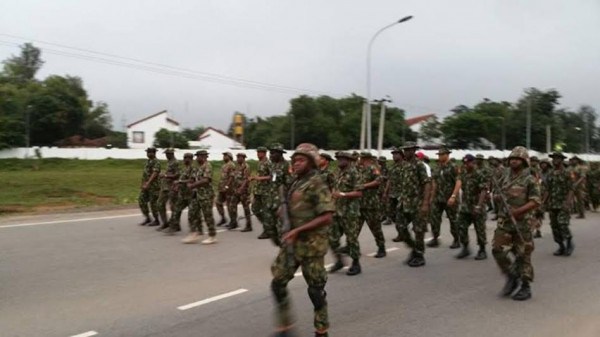 Fresh facts emerged yesterday, on how members of the Jama’atu Ahliss-Sunnah Lidda’awati Wal Jihad (Western education is evil) , Otherwise known as Boko Haram, were able to perpetrate Friday’s dastardly bombing that claimed about 12 lives and injuring many more at the Internally Displaced Persons, IDPs, camp in  Malkohi, Yola, Adamawa State.

In separate interviews, eye witnesses and returnees, resident in the camp, said some Boko Haram members masquerading as IDPs were inadvertently brought into the camp on Thursday, some 24 hours before the camp bombing.

They revealed that some of the persons, brought into the camp from Sambisa Forest, were the prime suspects in the  bombing.

One of the eye witnesses, Mr. Sunday Musa, told Sunday Vanguard that camp inmates were preparing to have breakfast when the blast occurred.

Musa explained that he and other inmates who had stayed long enough in Malkohi camp, had not been comfortable whenever new inmates were, brought in, confirming that there was a protest in the camp, sometime in March, when some IDPs were brought from Sambisa Forest. “Our fears were that we in camp know one another; we know where we came from; and for the military to just bring unknown faces to join us, especially from Sambisa Forest, has always been very disturbing to us”.

“Now”, he continued, “see what has happened. Unknown IDPs were brought in yesterday and there is bomb blast today. Who do you think is responsible?”

Sunday Vanguard discovered that the influx of IDPs, who may not have been properly screened before being allowed into the camp, was a possibility.

Another inmate, who preferred anonymity, disclosed that the bombing was not carried out by the usual drive-by instance or a suicide bomber who drove straight into the camp.

He added: “From the way the bomb exploded and the very stern nature of the work of the military here, it may have been smuggled into the camp much earlier.”

NEMA Camp Coordinator in Adamawa State, Sa’ad Bello, suspected that the blast might have originated from the over 300 IDPs brought into the camp that Thursday morning from Madagali and 70 others from Sambisa Forest.

The coordinator confirmed that the number of dead might be higher because of the seriousness of those injured.

Also at the scene of the blast, the North-East Coordinator of the Red Cross Society, Mallam Aliyu Maikano, who collaborated with his NEMA counterpart, described the situation as unfortunate.

An eyewitness, Malama Nefisatu Goni, who escaped the blast by the whiskers, narrated that she left the scene not quite ten minutes before the incident.

According to her, women always gathered in tents to make their hair and she just went there to try and make hers but was told to come back because of the busy schedule of the operators and the queue on standby.

“As I was moving from there”, Goni, a widow, narrated in an emotion-laden voice, “not quite long afterwards, I heard a loud bang only to see the debris of the tents flying everywhere”.

Earlier this year, the military authorities uncovered telephone conversations between some female IDPs and their male counterparts from Sambisa Forest at the camp – they turned out to be members of the Boko Haram. This discovery happened at the Malkohi camp and almost all the occupants were evacuated to an unknown destination via a military aircraft within 24hours.

And as if in an unholy coincidence with the September 11 bombing anniversary in New York, members of  Jama’atu Ahliss-Sunnah Lidda’awati Wal Jihad  struck at Malkohi Camp.

The latest bomb blast appeared to have taken the military by surprise and security analysts are puzzled about how such a magnitude of bomb could have been smuggled into or kept in the camp without being detected.

Now, the big question is, how safe are the IDP camps located in Damare, Fufore and Saint Theresa Catholic Cathedral in Adamawa State? Is the military in full control of the camps to guarantee the safety of thousands of the IDPs there?

Then, there is also concern for political and religious leaders, heads of corporate organisations and private individuals who continue to contribute to make life meaningful for the victims of terror? Will these  people be safe going to the camps?

That is not all.

There are national and international humanitarian bodies interested in the welfare of the IDPs. Will their personnel be secure enough to do their jobs as required considering the risk associated with the IDP camps these days?

Adamawa State Commissioner of Police, Mr. Gabriel Adaji, who was at the scene of the Friday blast, declared that security will be beefed–up in Malkohi camp. The Police Commissioner maintained that rigorous screening will be enforced  at all IDP camps in the state henceforth.

Adaji also suspected that the new IDPs, received  into the camp on Thursday, might have beaten security due to their numerical strength.