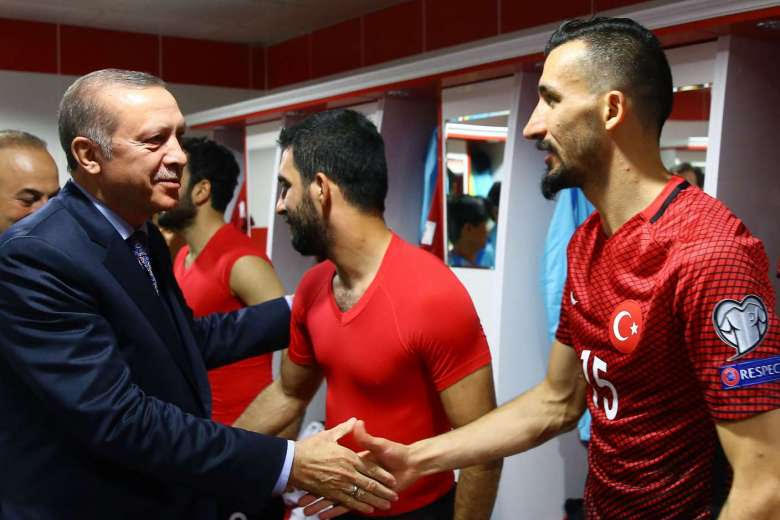 Turkish soccer executives campaigned this month for major constitutional change that would grant President Recep Tayyip Erdogan far reaching executive powers. The Turkish Football Federation’s (TFF) backing of Mr. Erdogan’s effort to accumulate more power put to bed any notion of a separation between politics and soccer. So did the failure of world soccer body FIFA and UEFA, its European affiliate, to condemn the TFF’s violation of a cardinal principle of international sports governance.

Speaking at a TFF conference, Mr. Erdogan punctured the fiction upheld by sports officials and politicians of a Chinese Wall that separates sports and politics. “I believe politics and football share many common aspects at the core. Just like sports, the essence of politics is competition, race… Just as a team, playing without any plan, tactic or strategy, have zero chance of winning the cup, politicians, political parties that have nothing to tell the people have no chance of success. Just like football, politics cannot be done without passion, love and dedication. You have to dedicate yourself,” Mr. Erdogan said.

If Mr. Erdogan set the ball up, TFF president Yildirim Demiroren, a businessman who built his fortune in liquid gas distribution, sealed the goal by campaigning for a vote in favour of enhancing the president’s power in a referendum scheduled for April 16. . Speaking at the same conference, Mr. Demiroren expressed the hope that Turkey would wake up on the morning of April 17 to discover that a majority of Turks had voted yes.

Turkish soccer’s partisan alignment with politics with no sanctioning by international and regional sports associations responsible for policing maintenance of the fiction of separation of politics and sports goes however further than simple endorsements. It involves sanctioning soccer officials, players, and club members for holding potentially dissenting political views.

Cumhurriyet, one of Turkey’s few remaining independent newspapers, reported last week that the TFF had suspended a referee in the Black Sea town of Sinop for publicly calling for a no vote in the referendum. The referee, Ilker Sahin, charged that the TFF was applying double standards by de factor stipulating that campaigning in favour of a yes vote was legitimate, campaigning against was not.

Galatasaray had voted a day earlier not to include Messrs Sukur, Turkey’s all-time top scorer, and Erdem in the expulsion of alleged followers of Fethullah Gulen, an exiled Muslim preacher, whom Mr. Erdogan blames for last year’s failed military coup. Those expelled included former provincial governors and prosecutors.

Messrs. Sukur and Erdem were members of the Galatasary squad that won the UEFA Cup in 2000. Mr. Sukur, like Mr. Gulen, has sought refuge in the United States from where both men condemned the failed military attempt to topple Mr. Erdogan.

A former recruiter for the Gulen movement, Said Alpsoy, who successfully focused on winning support for the preacher among Turkey’s top soccer stars said he had recruited half of Galatasaray’s team by the time he broke with the group in 2003.

“Traitors to our country and our state have no business in our established sports clubs. The board’s voting is inexplicable to the families of our martyrs and veterans,” Mr. Kilic said.

Heavily indebted clubs like Galatasary cannot afford to cross Mr. Erdogan who prides himself on having engineered financial relief for various clubs, partly through tax amnesties. UEFA executive Andrea Traverso noted that Turkey is the only member of the European association where debts and liabilities outstrip clubs’ assets.

Turkish soccer also owes Mr. Erdogan for protecting clubs from the potentially devastating fallout of the worst match-fixing scandal in Turkish history. The scandal in 2011 was the first public skirmish between Messrs. Erdogan and Gulen, who until then had been allies, particularly in successfully asserting civilian control of the armed forces. Aziz Yildirim, the head of Fenerbahce SK, the political crown jewel of Turkish soccer, who was at the core of the scandal, has accused Mr. Gulen’s followers of engineering the scandal.

The financial troubles of Turkish clubs are aggravated by a severe drop in match attendance following the introduction of a mandatory electronic ticketing system in 2013. Fans have boycotted the system in the belief that it was designed to identify them as part of a crackdown on popular, politicized fan groups. Soccer fans played an important role in mass anti-Erdogan protests in 2013, the largest since Mr. Erdogan first became prime minister a decade earlier.

For his part, Mr. Erdogan outlawed Mr. Gulen’s Hizmet movement as a terrorist organization in the wake of the failed coup. Critics of Mr. Erdogan have questioned his assertion and accused him of exploiting the coup to label most of his critics as Gulenists and act against them.

German intelligence chief Bruno Kahl told Der Spiegel earlier this month that Turkey had been unable to convince Germany of Mr. Gulen’s guilt. “Turkey has tried to convince us on a number of different levels. But they haven’t yet been successful,” Mr. Kahl said.

A former soccer player, Mr. Erdogan has sought to enhance his popularity in soccer-crazy Turkey in advance of the referendum by publicly identifying himself with the sport. The president was among the first to congratulate the Turkish national team on the pitch in Ankara for its defeat of Finland in a World Cup qualifier.

In doing so, Mr. Erdogan is in good company. Many world leaders see identification with a popular sports team as way to enhance their own popularity. Congratulations are, however, a far cry from turning soccer into a willing political tool. It raises questions about where the dividing line is in the alleged separation of sports and politics as well as about the integrity of international sports governance.