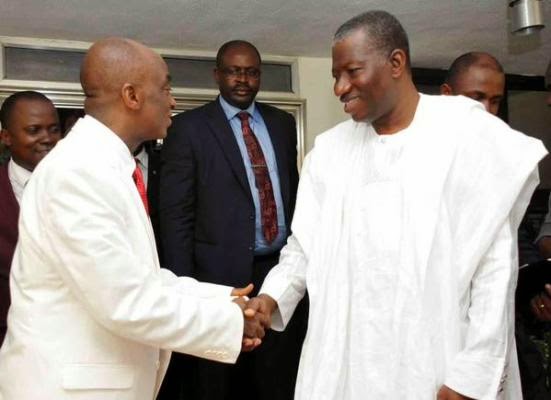 PRESS CONFERENCE ON PROVOCATIVE STATEMENTS AND HATE SPEECHES MADE BY PASTOR BOSUN EMMANUEL AND BISHOP DAVID OYEDEPO HELD AT THE NATIONAL HEADQUARTERS OF THE MUSLIM RIGHTS CONCERN (MURIC)  ON TUESDAY 3RD FEBRUARY, 2015

Brothers and Sisters in Islam,

Gentlemen of the Press,

We welcome you to this press briefing. The reason for inviting you today is the ongoing attempt to cause social commotion in our dear country, Nigeria, by whipping up religious sentiment using baseless, unfounded and unreliable allegations.

These despicable and disgraceful attempts are being championed by two Christian clerics, namely, Pastor Bosun Emmanuel and Bishop David Oyedepo.

Pastor Bosun Emmanuel belongs to the Redeemed Christian Church of God and he is a member of the executive of the Christian Association of Nigeria (CAN). He represented CAN at the just concluded National Conference.

In a recorded and highly provocative message, Pastor Bosun Emmanuel made the following dangerous claims and Satanic assertions:

Bishop David Oyedepo of the Living Faith Church (Winners Chapel) was more blunt in his hate speech and death-wish for Muslims. He exploded during one of his services inside his church and was quoted as saying:

We cannot but wonder how truly ‘Christian’ are Pastor Bosun Emmanuel and Bishop Oyedepo. How faithful are they to their holy book? The pulpit is a platform of love and kindness. It is the place for hope when all is lost. How can they use the same pulpit to incite Nigerians against themselves? How can they command the spilling of blood?

The Bible says, “Love your neighbour and bless those that curse you” (Luke 10:27) “Forgive, in order to be forgiven, for if you do not forgive those that offend you, neither will your father, which is in heaven, forgive you” (Mathew 6:14). Romans 12:17-21 warns against seeking vengeance while Mathew 26:52 further warns that those who take to the sword will perish by the sword.

A simple analysis of the above statements from the pulpits of two Christian clerics show that Pastor Bosun Emmanuel has willfully incited Nigerian Christians against their Muslim compatriots. He has also deliberately misled them into believing that Nigerian Muslims had plotted to exterminate the Christians.

Bishop David Oyedepo has also openly encouraged Christians to take the law into their hands and to spill the blood of Muslims. The phrase “anyone that looks like them” in his statement above is the most dangerous. No other interpretation can be more suitable for this phrase than “any Muslim you can find”.

This is very interesting. Bishop Oyedepo wishes to turn his followers into killers of Muslims. We are not losing the significance of this statement and its implications at a time like this. A pastor who is very close to the Nigerian Head of State, President Goodluck Ebele Jonathan, is calling on Christians to kill Muslims.

The same pastor has threatened to open the gates of hell for those opposing Jonathan! We wonder if Bishop Oyedepo has the key of the gate of hell in his breast pocket! That will be strange indeed! We thought the cleric should be more interested in the gate of heaven and how many souls he could lead through it.

Bishop Oyedepo exposed his hatred for Northerners when he asked rhetorically, “Must the North continue to rule?” This is a misleading rhetoric calculated to whip up ethnic sentiment. It is the last thing we expect from a cleric of his caliber.

Oyedepo has also boasted that Christians are capable of destroying Nigeria, a satanic mission which he has already embarked upon through these unguarded statements. By inviting God to break up Nigeria, Oyedepo has demonstrated beyond any reasonable doubt that all he wants now is for Nigeria to break up. He has placed a curse on his country, “Break it now!” He cried hysterically. This is treasonable. Bishop Oyedepo has failed to lead his followers responsibly.

We can imagine what would have happened if an Imam or Shaykh had uttered such treacherous statements. He would have been arrested instantly and taken to Abuja. Members of his family would not have had access to him or known his whereabouts for months, if not for years. This has been the fate of some Islamic scholars in Nigeria under President Jonathan.

We have every reason to quarry the role of the Nigerian security agencies in the present dispensation. Why do they employ double standard in the interpretation and application of the rules? Why do they always ignore the agent provocateur among the Christian clerics while innocent Islamic scholars are arrested, dumped and forgotten in underground cells?

In this regard, we call the attention of President Jonathan to this dangerous trend going on under his very nose. The buck stops at Mr. President’s table. By the Grace of God, Jonathan is the chief security officer in this country, at least as at today. Nigerian Muslims demand an explanation from President Jonathan. The provocative statements have been recorded in audio and video clips and circulated wide. They have gone viral in social media. Mr. President, Sir, are you aware of the provocative statements made by these two Christian clerics? If so, what did you do about them?

Nigerian Muslims are not aware that you did anything about them so far. This means we are not safe. Mr. President we are not safe under you. You have failed to assert your authority and prove that you are the chief security officer in this land. How can you allow Christian leaders to threaten Muslims and yet you cannot caution them? Some of the incriminating statements were uttered about three months ago. There is no statement from Aso Rock up till now. It has been business as usual. We reject this lackadaisical approach to administration.

We therefore demand reassurance concerning our safety. We demand the immediate arrest of Pastor Bosun Emmanuel and Bishop David Oyedepo.These two fanatical Christian clerics must be arrested and cautioned. They must sign an undertaking wherein they will pledge to refrain from (and to keep their followers from) any act capable of disrupting law and order. Anything short of this will mean that President Jonathan himself is the one pushing the war-mongering pastors to vilify and attack Muslims. We will then hold the president responsible for any religious commotion particularly in the South-West where it has never occurred before.

We appeal to the international community to take note of this ugly development in Nigeria where Christian clerics are metamorphosing into religious extremists and inciting their followers to pull out the necks of Muslims and spill their blood. We call attention to some countries in Asia and Central Africa where Muslims are hounded and killed by mobs. The attendant humanitarian crisis often affect the whole world but worse still, it fuels more acts of terrorism.

MURIC charges other Christian leaders to speak out on this issue. The Christian Association of Nigeria (CAN) should break its silence on the issue. It is our considered opinion that Pastor Bosun Emmanuel and Bishop Oyedepo do not necessarily speak for the generality of Christians nationwide because we know that patriotic and true followers of Jesus are greater in number than the blood-thirsty war-mongers. We jog the conscience of the peaceful Christian majority and ask them to speak out now.

We, the Nigerian Muslims, reiterate our condemnation of terrorism. We denounce attacks on Christians. We have repeatedly condemned Boko Haram and we have insisted that they are a misled group. Terrorists are not Muslims and Muslims are not terrorists.

It is also didactic to remember that Muslims and their leaders have also been victims of terrorist attacks. This should be good reason for Christians and Muslims to come together to fight the evil called terrorism.

We love our Christian neighbours and we are prepared to co-exist peacefully together, in an atmosphere of mutual respect. Fate has brought all of us together and there is nothing we can do about it unless we want to cause pandemonium. This country is for all of us and nobody is going to leave for others. Even if we start a Christian-Muslim war today, no group can wipe out the other. It will be a prolonged war of attrition capable of causing prolonged suffering, hunger, disease and a humanitarian crisis of unprecedented proportion. It is therefore necessary for us to realise that our only hope of survival is by loving and sharing.

We call on all Christian organizations, including CAN and individual Christian dignitaries who are keen on keeping this country united and peaceful to respond to our statement. It is an invitation to love.

We therefore appeal to all Nigerians to sink their differences and continue to tolerate and love one another regardless of religious and ethnic backgrounds. We appeal to Nigerians to ignore the attempt by these two pastors to bring religious sentiment into the 2015 electioneering campaign. All the political parties have Christians and Muslims as members. For instance, the chairman of the Peoples’ Democratic Party (PDP) is a Muslim (Alhaji Adamu Muazu) while that of the All Progressives Congress (APC) is a Christian (Chief John Oyegun).

MURIC charges Nigerians to vote according to their consciences. Let us vote for integrity, credibility and performance. Let us shun religious bigotry and ethnic jingoism. Let us rescue Nigeria from the jaws of the two zealots: the Christian fanatics and the Muslim extremists.

Finally, we appeal to Muslims nationwide to ignore the provocations of Pastor Bosun Emmanuel and Bishop Oyedepo, to remain peaceful, law-abiding, yet vigilant.