I was on my way to work on the morning of Monday, January 26, when my friend, Sodiq Alabi, sent me a Facebook message asking me how to contact THISDAY newspapers since I am more familiar with newspaper houses as a regular contributor to issues in national dailies.

Sodiq included in the message a web link to an article in THISDAY newspaper with the title, “Cambridge University: Hausa Language Not Offered in 1961 Exams”. I opened the article to see these lines:

“The controversy over the secondary school results of the All Progressives Congress (APC) presidential candidate, General Muhammadu Buhari, continues as the  University of Cambridge has said that Hausa Language, which is one of the subjects listed by Buhari, was not offered in its examinations in 1961.

“The disclosure was contained in a statement from the office of the Director of the PDP Presidential Campaign Organisation claiming it came through an e-mail dated Thursday, January 22, 2015 from the institution’s Archives Delivery Service Officer, Jacky Emerson, to one SODIQ ALABI who requested for confirmation if the examination body offered Hausa Language in the 1961 West African Certificate Examination it organised.

“Emerson, in his one-sentence reply, said: “According to the Regulations for 1961, African Language papers, including those for Hausa, WERE NOT included for West African School Certificate.” 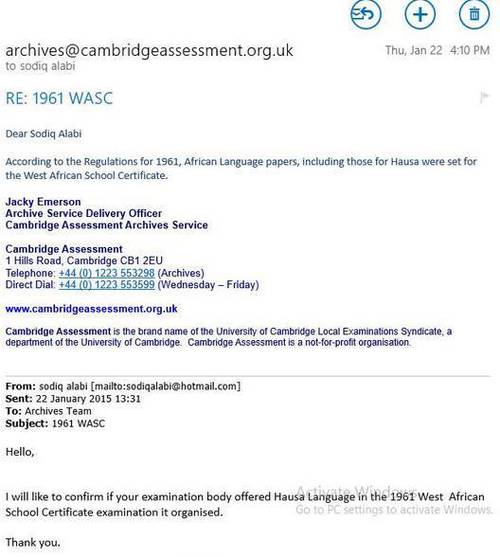 “This development may have further cast doubts on the certificate which is purported to be General Buhari’s.  He is yet to react to the assertion by the Peoples Democratic Party (PDP) Presidential Campaign Organisation that the document (the published certificate) was forged and illegally procured.” (Capitalizations mine)

Sodiq was shocked such falsehood was attributed to him by Mr. Femi Fani-Kayode and wanted to contact the Editor of THISDAY for such wicked misrepresentation. Sodiq Alabi ([email protected]) had written an email to Cambridge Assessment, the brand name of University of Cambridge Local Examinations Syndicates, on January 22, 2015, 13.31 hours, to confirm whether Hausa was truly offered by it in 1961 examinations. By 4.10pm same day, Jacky Emerson ([email protected]), Archive Services Delivery officer of Cambridge Assessment, replied thus: “Dear Sodiq Alabi, According to the Regulations of 1961, African Language papers, WERE SET for West Africa School Certificate.” 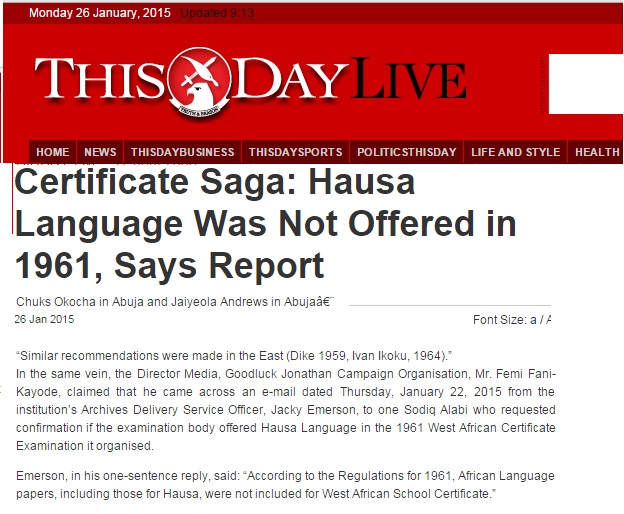 A screenshot of this email exchange was shared with us on Facebook by Sodiq and it went viral on the internet. The email triggered other Nigerians to send emails to Cambridge Assessment for independent confirmation and the school came out with a release on its website the next day. In the release titled, “Statement in response to Nigerian Presidential election enquiries”, the school stated, “The organisation also confirmed that according to the Regulations for 1961, African Language papers, including those for Hausa WERE SET for the West African School Certificate.” Here is the link to the Cambridge Assessment website where this confirmation was published:http://cambridgeassessment.org.uk/news/statement-in-response-to-nigerian-presidential-election-enquiries/.

It is however surprising that Femi Fani-Kayode went ahead to alter the content of Sodiq’s email in his press statement to, “According to the Regulations for 1961, African Language papers, including those for Hausa, WERE NOT included for West African School Certificate.”, and still quoted the email as the source.

It is very unfortunate that this is the man speaking for the President’s re-election campaign. How do we believe every other “fact” he has quoted has not been altered as well? It is a shame.

It is also very unfortunate that our newspapers have gone to sleep and investigative journalism is at its lowest ebb in Nigeria. How will Femi Fani-Kayode not be feeding newspaper reporters with lies when he knows how lazy some of our journalists have become? This is not an advertorial that does not require independent confirmation. All THISDAY and Daily Post that reported this Fani-Kayode’s glaring lie needed to do is to seek out Sodiq or confirm from Cambridge – which had posted a confirmation statement on conduct of Hausa language in 1961 WASC on its website since January 23, two days before Fani-Kayode came up with this lie – and ask for their side of the story.

It is particularly curious that I had, in an earlier article sent to THISDAY, which was published in its January 25 edition, attached a screenshot of the email from Sodiq to buttress some other arguments, so THISDAY editors, at least their OP-ED editor, could not have claimed not to have seen the original content of Sodiq’s email before Fani-Kayode’s alteration.

This is not the first time President Jonathan’s men are forging or altering documents to demonize anyone perceived as the President’s “enemy”. His New Media Assistant, Reno Omokri, was also busted in February last year, when he hid under a pseudonym, Wendel Simlin, to send false but damaging reports to newspapers to demonize the then just suspended Governor Lamido Sanusi of Central Bank. A dig into the source of the computer used in typing the document showed it was a certain Reno Omokri that authored it!

How lowly can people get?

Oyewale, a chartered accountant and blogger, lives in Ajah, Lagos. He can be reached at [email protected]