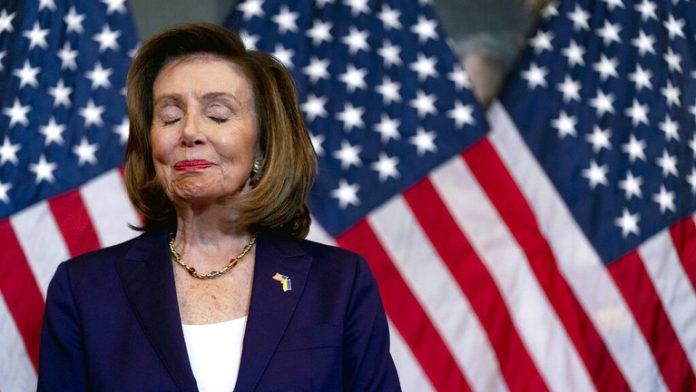 The 118th Congress will be inaugurated on January 3, 2023, ushering in a number of changes, including Republican control of the House of Representatives and a flip of the speakership. That means that long-serving Democratic Party leader Nancy Pelosi will have to relinquish her gavel, most likely to Republican Party leader Kevin McCarthy.

This is Pelosi’s second term as speaker; she held the position for the first time from 2007 to 2011, making history as the first – and so far only – woman to do so. Indeed, Pelosi’s record as the third-highest constitutional officer in the United States has been historic – but perhaps for less than savory reasons.

For starters, the California Democrat is a well-known self-dealer. Pelosi, for example, was one of the most high-profile members of Congress named in a five-month Business Insider corruption investigation. She is said to have substantial investments in companies like Tesla, Disney, Alphabet (Google’s parent company), and Meta (Facebook’s parent company), all of which she is directly responsible for regulating as a member of Congress.

It should also come as no surprise that she has repeatedly spoken out against preventing members of Congress from trading stocks and other financial assets, even if she later reversed her position when public pressure mounted. “Ours is a free-market economy. “They (Congressmembers) should be able to participate in that (trading),” she told reporters in December 2021.

There is an argument to be made that members of Congress should be allowed to make such investments. After all, they must pay for housing in both their district and the notoriously expensive Washington, DC area. They must also cover all of their own transportation costs to and from their district. And they have to do all of that while also raising a family on a $174,000 salary. When you think about it, it’s not all that glamorous.

However, looking at Pelosi’s net worth of $114,662,521 according to OpenSecrets data from 2018, we can see that this argument is hardly valid. In fact, if you look at her individual wealth chart over the years, you’ll notice that her wealth increased exponentially with her position as a speaker. It’s as if her power in Congress is directly proportional to her personal wealth accumulation, which, I believe we can all agree, is the definition of corruption.

Along with being greedy, the departing speaker is a zealous war supporter. She told reporters in Damascus in 2007, during George W. Bush’s presidency, that “there is no policy divide between us and President Bush, whether on Israel, Palestine, or Syria.” Anyone familiar with Bush’s genocidal Middle East plan will recognize this as saying, “Yeah, we completely agree with Satan on everything.”

She has also assisted presidential administrations in evading multilateral organizations and international law. She stated in a letter to the president (again, Bush) on the issue of Palestine that Congress is “concerned that certain nations or groups, if given a meaningful role in monitoring progress made on the ground, may only lessen the chances of moving forward on a realistic path towards peace.” “The United States has developed a level of credibility and trust with all parties in the region that no other country shares,” she and her colleagues claim.

Even her trip to Taiwan in August, despite Beijing’s protests that it would exacerbate tensions in the vital US-China relationship, was dangerously reckless at best and deliberately provocative at worst. It could easily have escalated into open combat between the world’s leading military powers, which has become far more likely as a result of her visit in any case.

Given everything that has been stated thus far (and there is no doubt that more could be added), it should come as no surprise that Pelosi will leave her position as Speaker in a negative light. As of this writing, her favorability rating was 40.1%, which is lower than President Joe Biden’s historically low approval rating of 43.1%, according to the FiveThirtyEight opinion poll tracker.

To put Pelosi’s unpopularity in context, according to Public Policy Polling, a larger share of Americans believe JFK was assassinated by a conspiracy (51%) and that Bush intentionally misled the public about Iraq’s WMDs (44%) than Pelosi, with just a fraction (37%) believing global warming is a hoax. For the sake of our country, it is hoped that the 82-year-old will step down from politics after her term as speaker ends. But, as is always the case with Pelosi, her career may outstay its welcome and drag on indefinitely.