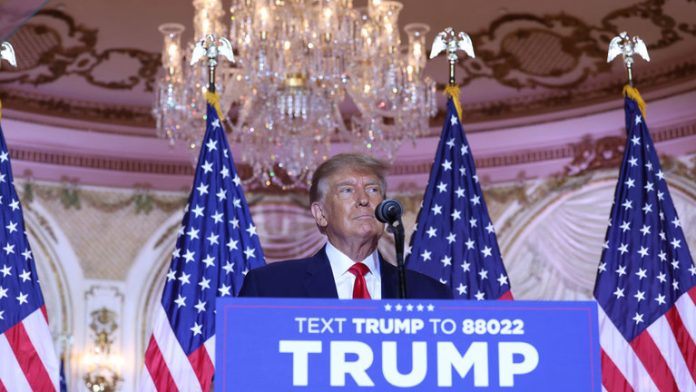 Former US President Donald Trump has hinted at a disaster for the Republican Party by suggesting that he run as a third-party candidate in the 2024 presidential election to divide conservative votes.

This week, Trump posted an article on his social media platform, Truth Social, calling for him to launch a third-party campaign if Republican leaders do not support his bid to reclaim the White House in 2024. The article, which appeared on Tuesday in the conservative journal American Greatness, argued that Republican leaders intend to defy voters’ will by preventing Trump from becoming the party’s presidential nominee.

“They’d rather lose an election to their brothers in crime, the Democrats, than win with Trump,” the article’s author, Dan Gelernter, said. He contended that, while electing an establishment candidate is preferable to electing a Democrat, giving in to such expedient choices has allowed “the uniparty” to control and ruin the country.

After losing to Democrat nominee Joe Biden in the 2020 presidential election, Trump reportedly considered forming his own party in 2021. According to ‘Betrayal: The Final Act of the Trump Show,’ a book by ABC News reporter Jonathan Karl, he told Republican National Committee Chairwoman Ronna McDaniel that he was “done” with the party. “You cannot do that,” McDaniel reportedly responded. If you do, we will forever lose.” “Exactly – you will lose forever without me,” Trump responded. I don’t mind. This is what Republicans get for failing to defend me.”

While Gelernter claimed that Trump is the Republican voters’ first choice, recent polling suggests otherwise. Republicans still support Trump’s Make America Great Again policies, but by nearly 2-to-1 (61%-31%), they want someone else to be the standard-bearer for that agenda in the 2024 election, according to a recent USA Today/Suffolk University poll. According to the same poll, Republican voters prefer Florida Governor Ron DeSantis to Trump by a 56-33 margin.