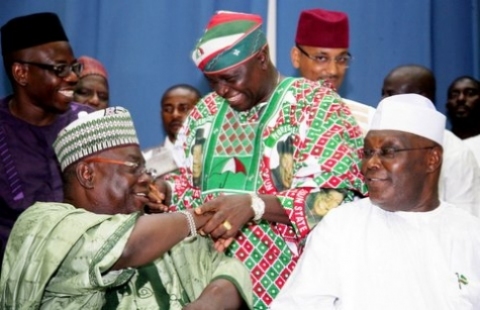 NewsRescue– The New Peoples Democratic Party (New PDP) wishes to reassure our numerous members, as well as the rest of Nigerians and the entire world, that we remain firmly united and that there is no crack whatsoever in our ranks.

This reassurance has become necessary in view of the antics of detractors desperate to deceive the public and to sow the seed of discord in our midst. These enemies of democracy routinely plant stories in the mass media to the effect that our ranks have become depleted but such stories inevitably end up being exposed as mere tissues of lies.

The latest of such fictions was the report which made the rounds yesterday purporting that His Excellency, Dr. Babangida Aliyu, Governor of Niger State, had resigned from the New PDP. Of course, Governor Aliyu, who is also Leader of the Group of 7 (G7) Progressive Governors, was quick to rubbish the reports and to restate his commitment towards the actualization of our lofty vision to reclaim the PDP from the hands of the anti-democratic forces that have hijacked it and reform the party in keeping with the vision of its founding fathers.

Investigations have traced the satanic rumour about Governor Aliyu’s imaginary resignation to the failed politicians in the PDP faction loyal to Alhaji Bamanga Tukur.

We have noted with happiness the short-lived celebration by the Tukur faction over this false report – which betrays their culpability in the fabrication of the discredited report.

For the avoidance of doubt, the New PDP under the leadership of Alhaji Aubakar Kawu Baraje is made up of selfless and committed patriotic Nigerians desirous of building a new Nigeria as envisaged by the founding fathers, using our great party as the starting point. Contrary to the belief in some quarters, we are not in this struggle for personal gains. Therefore, anyone waiting to see one New PDP leader or the other dump the party for pecuniary considerations should be prepared to wait forever.

We wish to use this opportunity to once more thank our members for their steadfastness and the rest of Nigerians who have demonstrated their love and affection towards us since we embarked on this struggle. With your continued support and prayers, our cause is sure to meet with success.