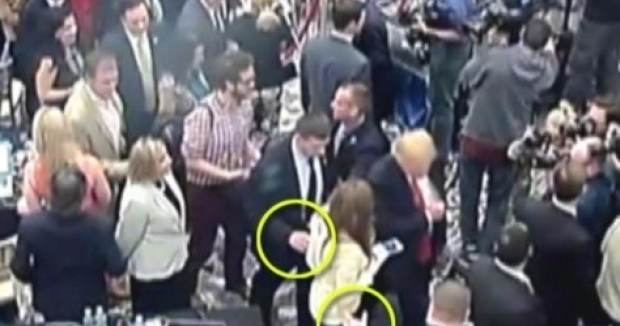 In a new video that is stalkerish to say the least, Michelle Fields the Breitbart reporter who got Trump’s manager in trouble for tugging her away from the Presidential candidate is exonerated as the video clearly captured Security Service agents telling reporter Michelle Fields to stay out of the secured area.

She later as seen stalked by the camera, snook back in before getting involved in the confrontation.

While the exoneration of Corey Lewandowski is super, it is quite creepy to see the way the camera trailed her.

IW– Prosecutors had charged Corey Lewandowski with misdemeanor battery after he reportedly grabbed Fields during a March 8 press conference in Jupiter, Florida, but now they will apparently drop the case thanks to new footage showing Fields re-enter a security zone after agents told her not to.

“We’re told the video shows a Secret Service agent telling Fields she was standing in a secured area where she was not supposed to be and the agent directed her to the area where the media had congregated,” TMZ reported. “We’re told the video shows Fields walking to the media area, rummaging through her purse, and as soon as the agent turned his back she went back to the secured area.”